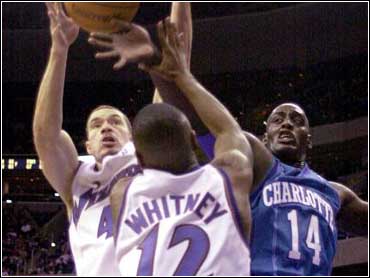 It was a franchise record, as was the 42 they made. They simply dominated the inside game in Saturday's 110-102 victory over the Washington Wizards, a team that already feels on the short end when it comes to respect from the officials.

"They definitely got to the line a lot," said Washington guard Mitch Richmond, whose team had a 35-10 free-throw attempt disadvantage in a loss at Miami Friday night. "The last two games, we've been getting killed at the line."

Coleman sealed the victory with a dunk in the final minute after Charlotte broke Washington's full-court press.

"No one's going to give us anything. But if you see a foul, you've got to call it. There's teams that are used to winning and they have that reputation and down the stretch they're going to get some calls to go their way."

The 55 attempts were also the most ever by a Washington opponent. The Wizards took 25, making 20.

The difference wasn't due to the respect factor so much as to the Hornets' ability to work the ball inside. Coach Paul Silas played 6-foot-8 Anthony Mason at point guard for much of the game, leaving space for Elden Campbell and Derrick Coleman to thrive inside.

Campbell had a season-high 27 points. He also had nine rebounds and was 15-for-18 from the line. Coleman had 20 points and 10 rebounds.

"Now we don't have three big guys fighting for space in the middle," said Mason, who added 12 points, eight rebounds and five assists. "We had shooters to draw people outside. We had room to play."

avid Wesley and Eddie Jones added 20 points apiece for the Hornets, who broke a two-game losing streak and salvaged a victory out of their three-game road trip. Charlotte is 7-17 on the road.

Richmond scored 22 points and Rod Strickland had 20 for the Wizards, who fell to 1-3 under interim coach Darrell Walker and are 3-6 since Michael Jordan joined the team as part owner and president of basketball operations. Jordan was not at the game, having gone home to Chicago for the weekend.

The Wizards' inside game was in trouble from the first quarter, when Jahidi White picked up three fouls. Then Juwan Howard dislocated his finger on an advertising board while diving for the ball late in the first half. He played the second half with the finger taped, but was less aggressive.

"We got in some tough situations where there were a lot of mismatches," Richmond said.

It was a very close game for three quarters 21 ties, 14 lead changes and neither team had a lead of more than five points.

Then Campbell made back-to-back baskets early in the fourth to give the Hornets an 83-77 lead. Three-pointers by Dale Ellis and Wesley increased the lead to 91-82 with 6:43 to play.

The Wizards rallied with back-to-back 3-point plays from Strickland and Richmond. A Richmond-to-Aaron Williams-to-Strickland fast break ended with a reverse layup to tie it at 94 with 4:01 remaining.

Coleman reversed the momentum with a driving layup and followed by blocking Richmond's layup at the other end. The block led to Campbell's dunk that gave Charlotte a 104-98 lead with 1:29 to play

and drew protests from the crowd that the referees were one-sided.

Coleman sealed the victory with a dunk in the final minute after Charlotte broke Washington's full-court press.

The loss ended a whirlwind week for the Wizards, who fired coach Gar Heard a week ago and played four games in five nights under Walker. Now they get a breather, playing only once over the next nine days.

"I'd just like to go home and see my family once," said Walker, whose wife and five children are back in Arkansas.