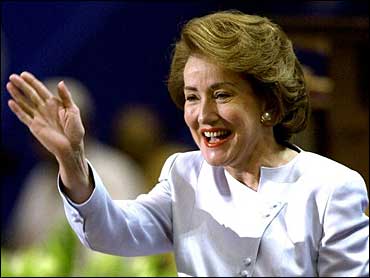 In her latest Political Points commentary, CBS News Senior Political Editor Dotty Lynch takes a look at how some high-profile women candidates are faring on the 2002 campaign trail.

On September 28, 1987, when Rep. Patricia Schroeder announced she had decided not to run for president, she burst into tears and said, "I couldn't figure out a way to run. There must be a way, but I haven't figured it out yet." Political women spent a long time defending those tears, but behind the scenes they were mortified.

Much has happened in the past 15 years, and while no woman has made it to the White House – or even into the presidential primaries – women candidates have figured out a lot. They know how to raise money, how to run a campaign and how to handle the brutal give and take of modern politics without dissolving into tears.

But there are still stereotypes, both positive and negative, about women candidates. Voters begin by thinking women are more honest and caring than men; they also wonder if women have what it takes to hold political office. Strategists planning campaigns against women often use a one-two punch. Republican consultant Linda DiVall says that the "first thing opposition campaigns try to do is to tar a woman candidate's integrity." Then they exploit the idea that the woman is incompetent.

As the 2002 campaigns unfold, we are beginning to see some textbook cases of how to attack women candidates and how the candidates are working to deflect these attacks.