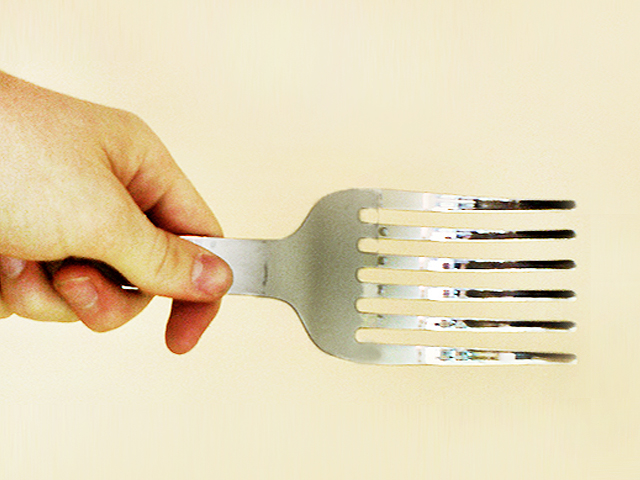 (CBS) Could big cutlery be the key to controlling your weight? A provocative new study shows that restaurant-goers eat less when they tuck into generous portions using a plus-sized fork.

For the study - published online by the Journal of Consumer Research - people eating lunch or dinner at an Italian restaurant somewhere in the Southwest were randomly selected to be given a fork that was either 20 percent larger or 20 percent smaller than the restaurant's regular fork. By weighing each plate of food before it was served and after it was collected at the end of the meal, University of Utah researchers found that diners who used big forks ate significantly less.

Previous research showed that big plates seem to encourage people to eat more. Why would cutlery size have the opposite effect on restaurant-goers?

"The small fork gives a feeling that they are not making much progress in satiating their hunger, which results in more consumption compared to when they have a large fork," the researchers concluded. "Grandma's advice tells us to consume small bites, but remember, she also tells us to chew well so that our body has enough time to let us know that we are full. However, given people's busy lives and the growing trend of eating in restaurants, if we are not chewing longer, then consuming from a larger fork may actually be more helpful in controlling overconsumption."

In other words, big forks hold more food, giving people a visual cue that they are filling up.

The researchers pointed out that their findings apply only to restaurant customers, and not to people eating at home, HealthDay reported. That's because eating at home involves subtly different goals than eating at a restaurant.

But if you're one of the untold millions of Americans trying to control your weight by eating less, it seems the big-fork strategy just might be worth taking a stab at.