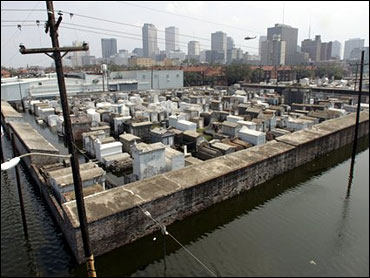 This column was written by Chris Mooney.

Recently my mother, a refugee from Hurricane Katrina now holed up in Baton Rouge, La., pointed out something that had never occurred to me before: Despite having grown up in New Orleans, played football there, and gotten drunk for the first time there at a ridiculously young age, I had never had the quintessential experience of fleeing the city in fear of a hurricane.

It was all a matter of timing. In 1995, the year the Atlantic Ocean kicked into its current, active storm cycle, I went away to college — as far away from New Orleans as possible. So I spent my undergraduate autumns with only a vague awareness that my family was, from time to time, busy fleeing nature. I never had to sit in traffic for hours just to get a few miles beyond the city. I never had to return to find that the storm had turned aside, but that those who did not evacuate had been living it up at hurricane parties — drinking the frozen red drinks that are also defiantly called Hurricanes, and scoffing at those who fled.

After college came visits to New Orleans at Thanksgiving and Christmas, and two more prolonged stays. Twice I used the city as a refuge when life elsewhere didn't go as planned. But it was never hurricane season, and I never allowed myself to stay too long. I distrusted New Orleans, I think, because of how effortlessly it lived up to its nickname, the Big Easy. I felt it wanted to ensnare me in its sun-and-alcohol-soaked embrace.

Yet at the same time, as a writer on science, the city intrigued me. Never having had to live through the nightmare of fleeing a projected hurricane (only to find that the storm was ultimately diverted and that I'd slept in a seedy motel for nothing), I could view New Orleans with cool detachment and dissect its odd behavior. I could download storm-surge models and slowly shake my head.

Who were these strange life forms that risked catastrophe each year and thought nothing of it? It was one thing to be relaxed and laid back about underage drinking, corrupt brake-tag stations, and ridiculous debutante balls; it was another to take such an approach to impending cataclysm — or so I thought. But then, I was never really a true New Orleanian. When northeasterners mispronounced the city's name (saying "New Or-leens," as they so often did), I would dutifully correct them, but my heart was never in it. I sought out other coolly detached scientists and engineers, who were equally baffled by the city's behavior. They'd been warning about the "big one" for years, and few mustered a lot of energy to disagree with them — but no one sprang into action, either.

On one trip into town, I asked a few of these experts to drive me around the city. There are — or were — places in New Orleans where you can stand atop a levee and have a sudden, terrifying epiphany. I became, in my own small way, a Jeremiah about risks to the city, as readers of The American Prospect may recall from my article of May 23. My brother, at least, paid attention. Repeated e-mail forwards persuaded him to purchase flood insurance for his home in mid-city. With Katrina boasting 175-mile-per-hour winds and an eye the size of a small state as it perched atop the Gulf of Mexico, he called to thank me for warning him about the danger.

My worst-case-scenario approach to New Orleans had its value, then, but I had ulterior motives. I was warning of destruction for a city that I'd never really accepted — and that had never accepted me. New Orleans would continue to ignore warnings (too busy partying) and I would continue to lecture at it. It was the cool kid. I was the suck-up doing its homework.
Reality prevails in these situations, ultimately, and science won't be ignored forever. After all the destruction, death, and misery, New Orleans — if there is still to be a New Orleans — will have to radically change its ways. It will have to rebuild to make itself much less vulnerable. It will have to listen to computer models. Its residents won't ever shrug off another impending storm. Hurricane parties will seem unthinkable.

It will never be the same.

Chris Mooney is a columnist for The American Prospect Online and the Washington correspondent for Seed Magazine. His daily blog and other writings can be found at www.chriscmooney.com.