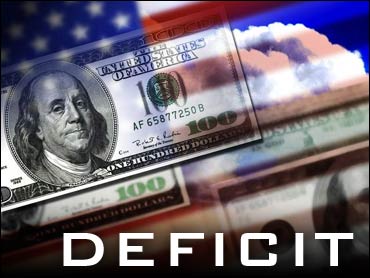 Only a month ago, the budget office, which is Congress' top nonpartisan fiscal analyst, said for the first time that it believed this year's shortfall would exceed $300 billion.

But that projection excluded this year's price tag of the tax reductions enacted three weeks ago, which totaled $330 billion through 2013. It also failed to reflect an ongoing softness in the economy, which is generating lower federal revenues than the government had anticipated.

"CBO now projects that the federal government is likely to end fiscal year 2003 with a deficit of more than $400 billion," the office said in its monthly analysis of data from the Treasury Department.

The largest budget gap ever was the $290 billion in red ink produced in 1992.

For months, some private analysts have been projecting a deficit this year of over $400 billion.

But in February, Mr. Bush said he expected this year's shortfall to be $304 billion, assuming his tax and spending plans were enacted but not including the costs of the war with Iraq. Democrats at the time predicted that the deficit would be worse.

A $400 billion deficit would be nearly 4 percent the size of the U.S. economy. Many economists consider that to be a significant measure of the government's ability to afford its red ink. As the condition of the budget worsened in the 1980s and early 1990s, there were seven annual federal deficits that were at least that large compared to the economy.

This will mark the second consecutive year with a budget deficit, following four straight annual surpluses in the second term of the Clinton administration.

In recent months, Republicans who for years decried federal imbalances have minimized their significance, arguing that they were manageable in an economy whose size exceeds $10 trillion.

Congress is working on legislation that would overhaul Medicare, including providing beneficiaries with prescription drug coverage. Mr. Bush has proposed spending $400 billion for the program over the next decade, an amount Democrats have said is too low.

The budget office said the tax cut enacted last month would add an estimated $61 billion to this year's shortfall. The federal budget year runs through Sept. 30.

The office said that for the first eight months of this fiscal year, the government has collected nearly $1.6 trillion, which is $60 billion or 4.9 percent less than it pocketed during the same period last year.