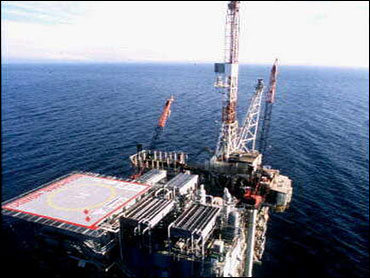 They also said the department has refused to provide critical e-mails and documents that could clear up the mystery over the contracts and provisions that dictate how much in royalty payments the companies must pay the government on the leases issued in 1998-99.

"We believe the department may have deliberately withheld crucial information" that could determine if the issue involves a deliberate action, complained Reps. Tom Davis, R-Va., and Darrell Issa, R-Calif.

Davis, chairman of the House Government Reform Committee, and Issa, chairman of its investigations subcommittee, demanded in a letter to Interior Secretary Dirk Kempthorne that additional documents and e-mails be provided concerning the 1990s drilling leases.

Issa has held several hearings on the matter, which concerns the failure of the department's Minerals Management Service to include a provision in the 1998-99 leases that would have required payment of royalties on oil or gas taken if the market price reached a certain point.

Because the provision was left out of leases issued those two years, the leaseholders have not had to pay royalties and won't for years to come, although oil and gas prices have soared well above the royalty trigger.

The Congressional Budget Office estimates that as a result the government has already lost $2 billion in royalties and stands to lose another $8 billion over the life of the leases, said Issa.

Interior officials told Issa's committee at two separate hearings that they believe the royalty threshold provision - which had been in earlier leases and was again in leases issued in 2000 and later - apparently was left out by mistake, but that they have not been able to pinpoint the reason.

The Interior Department's inspector general also has been investigating the circumstances surrounding the leases.

In their letter to Kempthorne, released Thursday, the two congressmen said two Interior Department officials had, in interviews with subcommittee staffers, "made reference to people who may have ordered the elimination of price thresholds in the (1998-99) deepwater leases."

"That kind of information is critical to this investigation, especially since Interior officials have testified to the contrary," Davis and Issa wrote.

The two Interior officials, identified as Jane Lyder, DOI legislative counsel, and Lyn Herdt, MMS congressional liaison, have "given us the impression" the department has "withheld critical information" from the subcommittee that might get to the bottom of the mystery, the congressmen continued.

Neither Lyder nor Herdt was available when attempts were made to reach them at their offices.

Interior Department spokeswoman Tina Kreisher said Kempthorne had talked to Davis and "assured him we will fully cooperate" with the congressional investigation. "We have followed all our normal procedures in responding to document requests," she said in a statement. "To the best of our knowledge, we have been fully responsive and have supplied every document previously requested."

Of particular interest to the House subcommittee are thousands of e-mails concerning deepwater leases, said the congressmen. The subcommittee had received only 12 such e-mails from the department, while the IG's office has indicated it was reviewing 5,000 e-mails covering the same period, they complained.

"We know there are relevant e-mails that we have not had access to," said Larry Brady, a spokesman for Issa's subcommittee.
By H. Josef Herbert