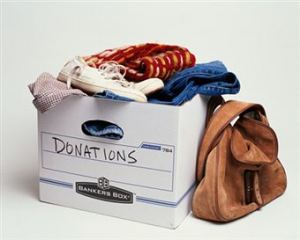 The charitable organization says the usual way for thieves to pull off such a theft is to follow the agency's trucks into neighborhoods, and grab the clothes shortly before the drivers get there.

The agency says it's a weekly occurrence.

"A lot of times, they will have unmarked personal vehicles with cages on the back, walking up to the house, taking the product and selling it at some off-site location, completely stealing from Big Brothers Big Sisters and the children," Castell told the station.

Kobbe Shaw, director of development for Big Brothers Big Sisters of Southern Nevada, says this is nothing new.

"These guys will sit behind our drivers, and then go down a neighborhood and be a good block-and-a-half away where our driver won't be able to catch up with them," he told KLAS.

Big Brothers Big Sisters is asking people to start watching and put their donations out their front doors where homeowners can see them.

There are no suspects in the case.