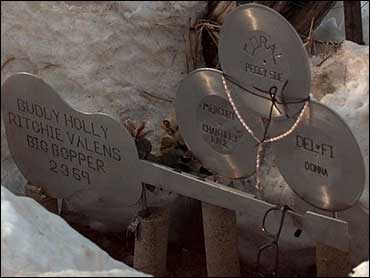 The son of "The Big Bopper" has hired a forensic anthropologist to try to answer questions about how his father died in the 1959 plane crash that also took the lives of famous early rock 'n' rollers Buddy Holly and Ritchie Valens.

Jay Richardson, who performs tribute shows as "The Big Bopper Jr.," hopes an examination of his father's remains will settle rumors that a gun might have been fired on board the plane, and tell whether the Big Bopper might have survived the crash impact and died trying to go for help.

"I'm not looking for any great bombshell, but then again you never know," Richardson said in a recent phone interview from his home outside Houston.

J.P "The Big Bopper" Richardson is buried in Beaumont, Texas. After his remains are studied, they will be reburied and a life-sized statue put up aside the grave.

Jay Richardson never knew his father, who soared to rock fame with his late '50s hit, "Chantilly Lace." His mother was pregnant with him when his father died.

The rock 'n' roll stars died on Feb. 3, 1959, when their four-passenger plane crashed after taking off from the Mason City, Iowa, airport — a tragedy memorialized as "the day the music died" in Don McLean's song "American Pie."

The group had been traveling by bus on their "The Winter Dance Party" tour in the Midwest, but Holly chartered the plane because the bus was cold and prone to breaking down.

Following a concert in Clear Lake, Iowa, Waylon Jennings, a member of Holly's band, gave up his seat on the plane to Richardson, who was feeling ill and seeking a shorter trip to the next stop.

An autopsy was performed on the pilot's body, but not on the others.

Dr. Bill Bass, founder of the research facility at the University of Tennessee nicknamed the Body Farm, plans to study the remains in March. He's an expert in determining identities and causes of death.

One of the most famous cases Bass worked on was confirming the identity of the Lindbergh baby who was kidnapped in 1932 and murdered.

In this case, Bass said, his goal is to "document all the fractures and get an idea of how many broken bones and which ones are critical and give them as much information as I can about the crash and how it affected his father."

In its accident report, the Civil Aeronautics Board said pilot error was the cause of the crash. The report didn't mention a gun belonging to Holly that was found by a farmer two months after the crash.

Newspaper accounts of the gun discovery fueled rumors among fans that the pilot was somehow shot, causing the crash. The owner of the flying service added to the conspiracy theory by insisting his pilot was not at fault, saying the pilot must have been "incapacitated."

No one has ever proved a gun was fired during the flight.

X-rays of the bones should be able to show if the Bopper was hit by a bullet because the lead in the bullet would leave debris.

"I don't expect to find that," Richardson said. "If these rumors persist, I can tell you Dad wasn't (shot). That's what I hope it comes to."

Another curious finding at the crash was that Richardson's body was discovered nearly 40 feet away from the wreckage, while the others were found in or near the plane.

Bass said examining the bones could determine whether the Bopper could have moved himself from the wreckage or if he was thrown by the force of the crash.

"I don't know how I would feel to know that my father died some other way than what I believed most of my life," Richardson said.

By Elizabeth A. Davis