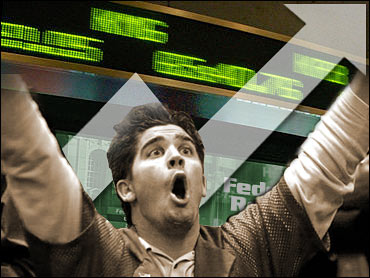 Positive data on productivity and the services sector extended the recent rally in U.S. stocks Wednesday, sending the Dow above the important threshold of 9,000 and the Nasdaq Composite to a fresh 52-week high.

The Dow was spurred by gains in Disney, which was the subject of upbeat analyst remarks, and Hewlett-Packard, which inked an information technology deal, and Boeing.

The rally was broad-based in nature, with buyers especially aggressive in the software, networking, financials and airline groups. The airline sector's main gauge rose to its highest level of the year amid optimism about May traffic numbers.

Indicative of the widespread buying interest, 26 of the Dow's 30 components were on the rise with 20 percent of the blue-chip index, 6 companies, tacking on more than 2 percent.

Auto stocks were among the few holdouts as they felt the sting of a profit warning from DaimlerChrysler. General Motors was the Dow's biggest decliner.

"The market is betting that the U.S. economy will improve later in the year and we're already beginning to see signs of that," said Peter Boockvar, equity strategist at Miller, Tabak & Co.

He believes the current rally can continue. "That's not to say we won't see consolidation days. But dips are going to be bought."

In the past four sessions, the Dow has gained nearly 330 points.

The market's broader indicators also climbed. The Nasdaq composite index, already trading at levels not seen in more than a year, rose 31.09, or 1.9 percent, to 1,634.65.

Among the Nasdaq-listed technology heavyweights reaching 52-week highs in the session were Cisco Systems and Oracle.

"While firms' determination to shore up profit margins has helped to keep corporate profits on a recovery path, it has also contributed to the jobless recovery," Zelnik noted.

In other economic news, the Institute of Supply Management's services index rose to 54.5 in May from 50.7 in April. Readings above 50 indicate expansion.

"This certainly looks good, and given our bullish view on growth we're happy to see it - but at the same time we can't with a straight face tell you that this number actually tells us anything about the future," he said.

Walt Disney was the Dow's most significant gainer, rising more than 4.4 percent after CS First Boston told clients it sees "upside surprise potential" for each of the company's problem spots, including its theme parks.

Airline issues took off, with AMR Corp. up a smashing 20 percent and Continental up 8 percent. Goldman Sachs said in a research note that May carrier numbers showed "moderate progress in narrowing industry losses" and that booking trends suggest further gains in June.

"We believe airline stock prices have further room to rise even in a moderate recovery," Goldman said. The brokerage rates both Continental and AMR an "outperform."