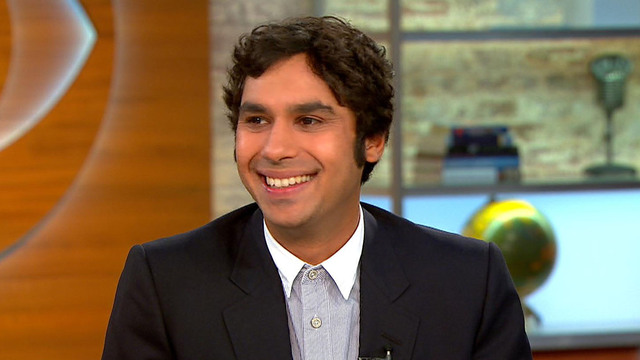 Actor Kunal Nayyar wants you to know that his Indian accent is real.

It was made famous by his role as the quirky astrophysicist Raj in CBS' hit comedy series "The Big Bang Theory." With the show kicking off its ninth season Monday, Nayyar is also making his book debut with a memoir, "Yes, My Accent is Real: And Some Other Things I Haven't Told You."

"People think that I'm not Indian or that I'm faking it," the British-Indian actor said on "CBS This Morning" Thursday. Nayyar, who was born in London and raised in New Delhi, also cleared up that he was not actually an astrophysicist, a common mix-up stemming from his on-screen role.

"They think I'm smart in real life, but unfortunately, that was not the case," joked the actor, who moved to America when he was 18 to study business at the University of Portland.

It was there that he first garnered an interest for acting, almost by chance.

"I walked into the theater because I was kind of lonely and didn't have friends," said Nayyar. "You know, the theater's a place where people who sort of feel like misfits can have a family because the theater is accepting of all types ... I felt at home."

The actor subsequently got his master's degree in acting, then moved to Los Angeles to "live out the big dream," where he landed his current gig on the show.

The book also contains a series of humorous, personal essays, describing everything from Indian stereotypes and awkward first romantic experiences to the various culture-shock encounters when he first moved to America.

"When I came here, girls who were friends of mine would put their arms around me and hug me, and I would think, 'Oh my God, she's my girlfriend,'" the actor said about the stark contrast of American dating culture to the "formality" of dating in India.

The actor also discussed his initial reservations and insecurities around his wife, a former Miss India, who he eventually learned was "very beautiful, both inside and out."

"It feels like yesterday that we started, you know ... We're still going strong," he said.