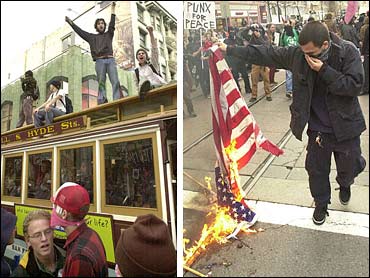 More than 100,000 people hit the streets of San Francisco on Sunday to join the voices around the world this weekend protesting a possible U.S. invasion of Iraq.

Also Sunday, in Missoula, Mt., a voice long identified with opposition to war - George McGovern - was heard at a peace rally attended by thousands, including a number of Vietnam War veterans.

"I'm sick and tired of old men dreaming up wars for young men to die in," said McGovern, who besides running for president also was a Senator, a United Nations ambassador, and a World War II bomber pilot who flew 35 missions over Nazi Germany.

McGovern said words from President Bush and other White House officials seem to have something in common. "I know I'm hearing the words of people who've never been near a battlefield," he said.

McGovern also called on Congress to rise to the challenge of trying to stop the war.

"If Congress isn't strong enough to check the executive branch, we're in very real trouble," said McGovern. "Then we are left with what we are doing here today. We have to mobilize other resources."

Although those opposed to the war were by far in the majority in various cities around the world Sunday, there were also counter-demonstrations: in support of President Bush and U.S. policy.

"War is bad, evil is worse!" chanted demonstrators at one pro-Bush rally, in Denver Sunday.

"I support our president and I support my sons. This is the only option," said Pam Pearson, 49, who has two sons in the Navy. "I'd rather force Sadaam out than have to play by his rules."

Some came dressed in colonial costumes or as World War II fighters. Others held signs that said "Remember 9-11?" as state legislators and religious leaders expressed support for President Bush.

Speaking in Missoula, McGovern - who won only one state when he ran for president on an anti-war platform during the Vietnam War - spoke directly to those who point to Sept. 11 as a reason to go to war against Iraq.

Osama bin Laden and not Iraqi President Saddam Hussein, said McGovern, is the one who is responsible for terrorist attacks on the United States.

In San Francisco Sunday, demonstrators had postponed their event one day to make way for the city's popular Chinese New Year parade and celebration. But the delay didn't hamper turnout, which appeared to swell throughout the day.

"Finally it seems there is a worldwide movement saying this is obviously a catastrophic path we're on," said Deborah Hoffmann, 55, part of a Jewish women's group at the rally. "And now everybody is out in the streets."

"We know that we have not been shown enough evidence for a preemptive strike," said Raitt said. "There are a million people around the globe who have shown they feel the same way."

After the main demonstration, a group of a few hundred people, some masked in bandanas, marched to the city's posh Union Square shopping area, where some pelted police officers with rocks and other objects. Police in riot gear closed off some stores to prevent looting, but there were no immediate reports of arrests, and reasons for the trouble were unclear.

Scores of demonstrations brought out millions of people across the nation and around the world Saturday. Rome claimed the biggest turnout - 1 million according to police, and London reported more than 750,000 in what police called the city's largest protest ever.

In New York, police said Sunday that more than 250 people were arrested the day before during a massive anti-war demonstration as tens of thousands of protesters packed a 20-block area north of United Nations headquarters.

Police said the crowd that withstood bitter cold was about 100,000-strong, while organizers estimated it at three to five times that size.

Most of the 257 arrests were for disorderly conduct and other minor violations, police said. Five people were arrested on felony charges and 53 on misdemeanors.

In Los Angeles, police estimated the crowd at 30,000; one person was arrested for vandalism, another for a warrant and three for disturbing the peace.

At an anti-war rally in Colorado Springs on Saturday, police fired tear gas at demonstrators and hit at least one with a rubber bullet after a demonstrators spilled out of a park and blocked a major thoroughfare.