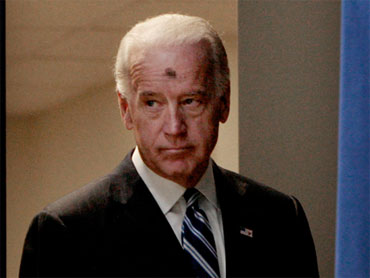 (AP)
Vice President Joe Biden appeared at an event marking the one-year anniversary of the economic stimulus package today with a noticeable black smidge on his forehead.

For many the mark was immediately recognizable as the ashes given to Catholics on Ash Wednesday, the first day of Lent. Biden, America's first Catholic vice president, also received ashes, which are meant to symbolize repentance and serve as a reminder of human mortality, last year.

On Wednesday morning, President Obama issued a statement commemorating Ash Wednesday, saying he and First Lady Michelle Obama "mark this solemn day of repentance and promise, knowing that Lent is a time for millions to renew faith and also deepen a commitment to loving and serving one another."

America has had one Catholic president, John F. Kennedy, but he was reportedly never photographed with ashes on his forehead.

Biden is a regular churchgoer who has said he believes his faith is consistent with his political views.