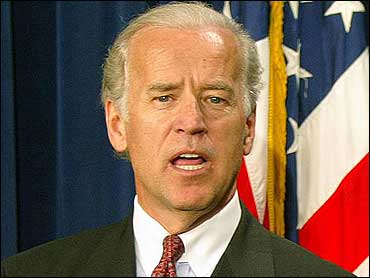 Biden also announced he has summoned Secretary of State Condoleezza Rice to testify before his committee next month to discuss the administration's new plan for Iraq as soon as it is made public.

The Delaware Democrat took advantage of a quiet holiday week to draw attention to his own proposal for Iraq, which includes beginning a drawdown of U.S. forces and finding a political settlement among the various ethnic factions there.

President Bush seems to be leaning toward a so-called "surge" of perhaps 30,000 more troops. Biden opposes that and demands that Iraqis come up with their own political solution, reports CBS News correspondent Thalia Assuras.

"I just think it's the absolute wrong strategy," Biden said Tuesday of an increase in troops.

Biden has spoken candidly of his desire to run for president and has made repeated visits in the past year to early voting states like Iowa and New Hampshire. But he is trying to find room on a crowded stage of Democratic contenders that includes Sens. Hillary Rodham Clinton of New York and Barack Obama of Illinois.

Biden warned that congressional Republicans — not Democrats — would suffer in the 2008 elections if they do not join him in speaking out against Bush and opposing troop increases in Iraq.

"Absent some profound political announcement . . . I can't imagine there being an overwhelming, even significant support for the president's position," he told reporters during a telephone conference call Tuesday.

If the violence continues two years from now, "every one of those Republican senators — and there's 21 of them up for re- election — knows that that is likely to spell his or her doom," Biden said.

Bush has not announced whether he plans to increase the number of troops in Iraq, but administration officials say that option is among several being considered. Also, Bush last week said he wants to expand the size of the Army and Marine Corps to lessen the strain on ground forces.

The move was seen by many military experts as laying the groundwork to announce early next month a planned surge in forces in Iraq.

Military experts and some ground commanders are skeptical that a surge in ground forces could work to settle the violence in Iraq. Those concerns were expressed in a new bipartisan report on Iraq.

"Sustained increases in U.S. troop levels would not solve the fundamental cause of violence in Iraq, which is the absence of national reconciliation," the Iraq Study Group concluded.

But others, including Sen. John McCain, R-Ariz., — another possible presidential contender — and experts at the conservative American Enterprise Institute, say a surge in forces could hold off the insurgency long enough to build up the Iraqi security forces and form a political settlement.

Biden, who will head the Foreign Relations Committee when Democrats take control of Congress next month, said he wants to hear from Rice on Jan. 9. The senator said she has agreed to testify, but only after Bush announces his plan on Iraq.

The president is expected to deliver a speech on Iraq sometime before his State of the Union address on Jan. 23.

Biden said he hopes the hearings will generate bipartisan consensus in Congress that will pressure the president to abandon talk of increasing troop levels in Iraq. There are currently an estimated 140,000 troops in the country.

"Even with the surge of troops, in a city of 6 million people you're talking about a ratio that would still be roughly above one to 100," Biden said of Baghdad. "It's bound to draw down support that we need in other parts of Iraq, including Anbar province."

"I think we'll only have to accept responsibility for the war if we remain silent," he said.

Biden said he delivered this message in a recent meeting at the White House, where he told Bush: "Mr. President, this is your war."