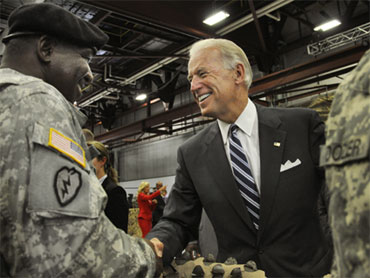 Rejecting suggestions that al Qaeda is becoming entrenched in Pakistan, Biden said in a taped interview broadcast Thursday that the United States is moving forward in the war on terror.

"I assure you, we are doing significant damage to al Qaeda in Pakistan as well as in Afghanistan so we're making progress," Biden said. "But the truth of the matter is that there's more to go."

The online leak of U.S. military documents by Wikileaks has revived questions about Pakistan's willingness to sever its historical ties to the Taliban, which is allied with al Qaeda, and deny them sanctuary along the border with Afghanistan. Biden said the documents date to before the start of the Obama administration and that the problems they describe within Pakistan's intelligence service are being dealt with and things are changing.

Liberals in the House have complained that the United States is engaged in nation building in the region nine years after U.S. forces struck against Afghanistan in response to the Sept. 11 terrorist attacks. Speaking on NBC's "Today" show, the vice president dismissed that notion.

"We're in Afghanistan for one express purpose, al Qaeda, the threat to the United States," he said. "Al Qaeda exists in those mountains between Afghanistan and Pakistan. We are not there to nation build. We're not out there deciding we're going to turn this into a Jeffersonian democracy and build that country."

A federal judge in Phoenix ruled against sections of the Arizona law requiring officers to check a person's immigration status while in the process of enforcing other laws.

The judge also put on hold parts of the law that required immigrants to carry their papers at all times, and made it illegal for undocumented workers to solicit employment in public places. In addition, the judge blocked officers from making warrantless arrests of suspected illegal immigrants.

"We don't think you can have 50 different immigration laws out there," he said, suggesting the Arizona law would damage federal immigration enforcement.

Speaking to CBS' "The Early Show" Thursday, New Mexico Gov. Bill Richardson (D) called the ruling "a temporary victory" and renewed his longstanding calls for a comprehensive immigration reform bill that would provide illegal immigrants a path to citizenship if they meet various requirements.

"It's a correct decision because what the judge said was that Arizona law was interfering into federal responsibility," Richardson said, adding that the law could lead to racial profiling and damage American interests abroad. "What I see is a protracted fight that will go all the way to the Supreme Court."

Biden was interviewed on Wednesday in Fort Drum, N.Y., home to the Army's 10th Mountain Division.