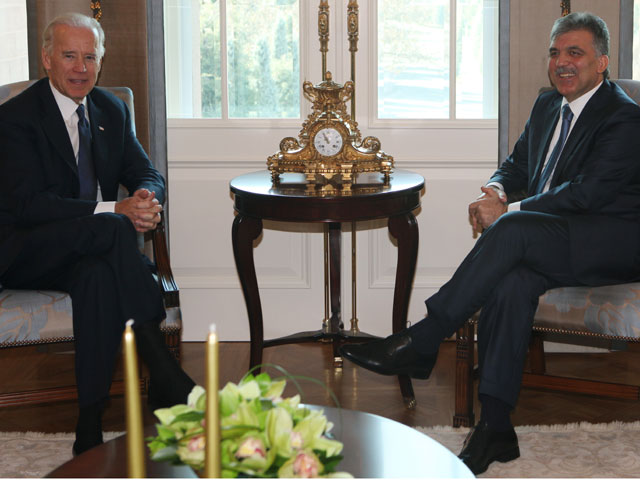 ANKARA, Turkey - Vice President Joe Biden has called on Turkey to impose new sanctions against Iran, while praising Ankara for its role in pressuring Syria to stop its bloody crackdown on protesters.

Biden's comments, published Friday in the Turkish daily Hurriyet, raise further pressure on President Bashar Assad's regime. A top U.N. human rights official warned Thursday that Syria has entered a state of civil war with more than 4,000 people dead and an increasing number of soldiers defecting from the army.

Assad, trying to defeat an 8-month-old revolt challenging his rule, faces widespread international condemnation at the growing death toll, with Turkey, a major critic of the autocratic leader's actions, announcing a new set of economic sanctions against his regime earlier this week.

"We look forward to the broadening of international sanctions as a means to bring about change in Syria," Hurriyet quoted Biden as saying on Friday.

He also urged Ankara to adopt further sanctions against Iran, which the West suspects is trying to develop nuclear weapons. Iran says its nuclear program is peaceful.

On Friday, Biden met President Abdullah Gul and Parliament Speaker Cemil Cicek in Ankara. Biden was scheduled to visit Prime Minister Recep Tayyip Erdogan who is recovering from a surgery at his Istanbul home on Saturday, U.S. officials said.

Biden also said that the United States "will continue to work with Turkey on pursuing shared interests in the Middle East and North Africa."

"We continue to support a diplomatic solution to our concerns with Iran," Biden said. "However, we also believe that putting pressure on Iran's leadership is necessary to secure a negotiated settlement and that is why we encourage our partners, including Turkey, to take steps to impose new sanctions on Iran."

An Iranian general said Saturday that Tehran would target NATO's early warning radar in Turkey if the U.S. or Israel attacks the Islamic Republic after an International Atomic Energy Agency report said for the first time that Tehran was suspected of conducting secret experiments with the sole purpose of developing nuclear arms.

Ankara agreed to host the radar in September as part of NATO's missile defense system, which is capable of countering ballistic missile threats from its neighbor. Turkey insists the shield doesn't target a specific country, but Tehran says the radar is meant to protect Israel from Iranian missile attacks if a war breaks out with the Jewish state.

The U.S. and its Western allies also suspect Iran of trying to produce atomic weapons, and Israel, which views Tehran as an existential threat, has warned of a possible strike on Iran's nuclear program.

Biden was also expected to encourage Turkey to repair ties with its formerly close ally Israel. As a long-serving member of the Senate Committee on Foreign Relations, Biden cemented his reputation as an unyielding supporter of Israel, winning the respect of many in the Jewish community.

"It pains us to see the two of them at odds because they're both such close partners of the United States," Antony Blinken, national security adviser to Biden, told a teleconference briefing from Washington on Monday. "And the bottom line is that improved relations between Turkey and Israel would be good for Turkey, good for Israel and good for the United States and indeed good for the region and the world so that's something we will continue to encourage."

The leaders also discussed Turkey's conflict with autonomy-seeking Kurdish rebels. The U.S. has deployed four Predator drones to Turkey from Iraq and also agreed to sell three helicopter gunships to help fight the rebels, who stage attacks on Turkish targets from their bases in northern Iraq.

Gul said after his talks with Biden that cooperation between the countries against Kurdish rebels "will continue more strongly."

Biden said the withdrawal of U.S. troops from Iraq by the end of December would not leave "chaos behind."

"As the majority of U.S. forces have already withdrawn from Iraq, we do not expect that the security environment in northern Iraq will change dramatically," Biden said.

Turkey also closely works with U.S. forces in NATO operations in Afghanistan and Libya, though it is not directly involved in combat.

Turkey, however, is also home to radical Islamic groups who oppose Turkey's cooperation with Washington and regard Osama bin Laden, killed May 2 in American helicopter-borne raid in Pakistan, as a hero.

A group of Islamist, some carrying posters of bin Laden, burned down an American flag in Istanbul during an anti-American protest outside a central mosque.

"We have made known our concerns over such issues as lengthy pre-trial detention and restrictions on the freedom of expression affecting journalists and the Internet," he said, adding that Turkey's plans for a new constitution should "deepen respect for human rights for all Turkish citizens."

Turkey is also under pressure to reopen a seminary that trained generations of Greek Orthodox patriarchs. The Halki Theological School on Heybeliada Island, near Istanbul, was closed to new students in 1971 under a law that put religious and military training under state control. The school closed its doors in 1985, when the last five students graduated.

"In many ways, Turkey has shown great tolerance toward minority religions. The continued closure of the seminary is an anomaly and an unnecessary mark against Turkey's international image," Biden said.

From Turkey, Biden will travel to Greece, where he will meet with new Prime Minister Lucas Papademos, who took office earlier this month.