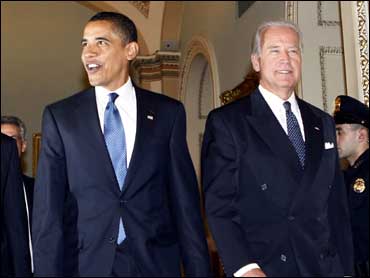 Joe Biden is heading to Southwest Asia just days before becoming vice president, a visit that signals the new administration's plans to make the troubled region an immediate priority.

To protect his security Biden aides won't say which countries he plans to visit, but the geographic description suggests destinations such as Afghanistan, Pakistan or India.

The Delaware senator is leading the bipartisan congressional trip later this week as chairman of the Foreign Relations Committee, a post he has to resign before becoming vice president on Jan. 20.

An official familiar with the planning of the trip, first reported by CBS News Monday in the Hotsheet Blog, said Biden is going now so the new administration can be ready from its first day to deal with the region.

The official said waiting until after the inauguration would create delays of one to two months for an official White House trip to be organized.

The official spoke on a condition of anonymity because details of the trip are not authorized for public release.

The trip is designed to help Biden and the other foreign policy leaders from the Senate he is taking along to get a baseline, on-the-ground assessment and the policy options in each country so they quickly can formulate policies for the region, the official said. It was suggested by the president-elect's national security team.

The mountainous border region shared by Pakistan and Afghanistan is widely viewed by intelligence experts as the focal point for Islamic militants loyal to both the Taliban movement and al Qaeda. The U.S. is expected to shift thousands of troops to Afghanistan early in 2009 to join the fight against an increasingly bold insurgency.

Meanwhile, the relationship between long-time nuclear rivals Pakistan and India has been tense in the wake of the deadly November terrorist attacks on the Indian city of Mumbai. The neighbors have fought three wars already, but both say they want to avoid military conflict over Indian allegations that "Pakistani elements" were behind the attacks.

Joining Biden will be Sen. John Kerry of Massachusetts, the incoming chairman of the committee. Also accompanying the vice president-elect will be Sens. Jack Reed, a Rhode Island Democrat, Susan Collins, a Maine Republican and Lindsey Graham, a South Carolina Republican. Collins and Graham are members of the Armed Services Committee.

By including Republicans, the incoming administration also is signaling a bipartisan approach to national security problems.

Biden spokeswoman Elizabeth Alexander said in a statement that the delegations "will make it clear to foreign leaders that they are not there to speak on behalf of the U.S. government, or convey policy positions for the incoming administration." But Biden's new status is sure to create intense interest with leaders of the countries he is visiting, who will be looking to him for guidance on the incoming administration.

Biden was scheduled to be sworn in for a seventh term Tuesday, and Alexander said the trip was one of several reasons he wanted to do so even though he will only serve a couple of weeks.

Alexander said Biden felt it was important to take the oath of office after being elected to the seat, noting that Lyndon Johnson did the same in 1960 when he was vice president-elect. Biden also has transition work to do in the Senate office after 36 years of service and wanted to finish his other work on the Foreign Relations Committee, Alexander said.

Edward Kaufman, Biden's chief of staff for nearly two decades, was appointed to fill the Delaware seat after Biden resigns until another election will be held in two years.