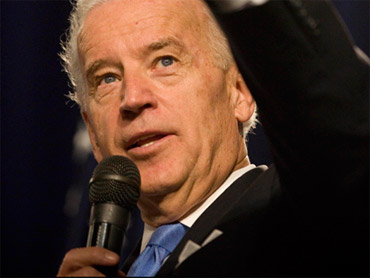 U.S. Vice President Joe Biden on Thursday implored Israelis and Palestinians to move beyond a diplomatic spat that has marred his trip to the region, urging the sides to waste no time in resolving their decades-old conflict despite daunting obstacles.

Biden used conciliatory language as he wrapped up a three-day visit to the area in an apparent attempt to get past the uproar sparked by an Israeli plan for new settlement construction in disputed east Jerusalem. The Israeli announcement - seen as a slap in the face to Biden - drew a sharp condemnation from the vice president as well as a Palestinian threat to withdraw from U.S.-mediated peace talks before they even begin.

The 22-nation Arab League, which gave Abbas the backing to resume talks with Israel, has recommended withdrawing support for indirect talks in the wake of the Israeli settlement plan.

Biden's speech appeared aimed at not letting the row with Israel derail the Obama administration's latest drive for Mideast peace. However, the vice president's effusive praise for the Jewish state - saying the U.S. has "no better friend" than Israel - could disappoint those who had hoped he would talk tougher in the wake of the new settlement plan.

Speaking at Tel Aviv University, Biden said the sides must get down to the business of making peace.

"To end this historic conflict, both sides must be historically bold," Biden said. "If each waits stubbornly ... this will go on for an eternity."

The vice president's trip had been meant to repair strained ties between Israel and the Obama administration. However, the Israeli plan to build new homes in east Jerusalem - the section of the city claimed by the Palestinians for a future state - quickly overshadowed the visit. Traditionally strong U.S. relations with Israel have been strained recently precisely because of Israeli settlements.

Biden reiterated his condemnation of the building plan, urging both sides to avoid acts that could undermine the negotiations.

"I, at the request of President Obama, condemned it immediately and unequivocally," he said.

Israeli Prime Minister Benjamin Netanyahu has apologized for the announcement's timing, saying he had no intention of embarrassing Biden, though he has refused to scrap the plan. He also said the project must clear additional bureaucratic hurdles and construction would not begin for years.

Biden said Netanyahu's explanation was "significant" and showed the construction plan need not hinder peace talks. He also opened his speech by stressing the U.S. has "no better friend" than Israel and saying the relationship is "impervious to any shifts in either country or either country's partisan politics."

But the vice president also urged Israel to make a serious attempt to reach peace, saying an agreement is "profoundly" in Israel's interests. At the same time, he urged the Palestinians - and the broader Arab world - to do more to work for regional peace.

Netanyahu has said he is eager to start negotiations with the Palestinians. But the hawkish Israeli leader has given few indications that he is prepared to make the sweeping concessions widely believed to be necessary to reach a deal. The planned east Jerusalem construction has only deepened Palestinian suspicions.

The Israelis and Palestinians agreed this week to resume indirect peace talks through U.S. mediation, ending a 14-month breakdown in negotiations. Biden stressed, however, that "the only path" to resolving the conflict is through direct negotiations.

"The most important thing is for these talks to go forward and go forward promptly," he said. "We can't delay."

The Palestinians seek the West Bank and east Jerusalem - areas captured by Israel in the 1967 Mideast war - as parts of a future state, along with the Gaza Strip.

Netanyahu has signaled he wants to keep parts of the West Bank along with east Jerusalem under Israeli control. Israel withdrew from Gaza in 2005, and the territory was subsequently overrun by Hamas militants.

In his speech, Biden outlined the contours of what the U.S. believes should be a final settlement. He said a Palestinian state must be based on the pre-1967 borders, with some modifications and strong guarantees for Israel's security.

He acknowledged the formidable obstacles that remain: the Hamas presence in Gaza, the continued captivity of an Israeli soldier in Gaza, the strength of Hezbollah guerrillas to Israel's north in Lebanon, and ongoing Palestinian incitement against Israel. He said such challenges are strong reminders of Israel's security concerns.

But he also urged Israel to embrace the moderate Palestinian leadership in the West Bank, with whom he met on Wednesday.

"Israeli leaders finally have willing partners who share the goal of peace," Biden said. "Their commitment to peace is an opportunity that must be seized."