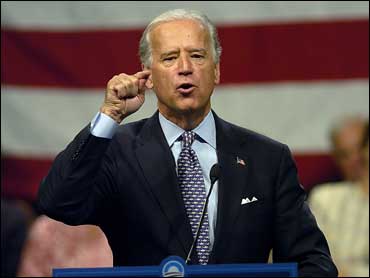 Joe Biden said Wednesday that Republican John McCain is aiming the same kind of attacks at Democratic nominee Barack Obama that Biden had defended McCain against during the 2000 White House race.

"It's my greatest disappointment," said Biden, who described himself as "good friends" with McCain.

Addressing a fundraising audience of about 300 in Boston, the Delaware senator recalled how then-Texas Gov. George W. Bush and his supporters in 2000 questioned McCain's commitment to his fellow Vietnam veterans and even suggested the Arizona senator was the father of an illegitimate child.

Biden said he supported Al Gore for president, but nonetheless called McCain during the campaign and said, "John, where do you want me? I'll go anywhere in the country and I'll stand before press conferences and I'll testify to your character. You just tell me."

"What really disappoints me is the very tactics used against him, they're trying to use against Barack Obama now," Biden said. "It's literally saddening. I didn't expect it, I didn't expect it. But I guess I should learn to expect everything."

Biden, Obama's vice presidential nominee, did not get into specifics, but a spokesman said he was referring to a new McCain ad suggesting the Illinois senator supported sex education for kindergartners, as well as a recent ad from a McCain fundraiser that linked Obama to 1960s radical William Ayers.

Biden also said he would respond forcefully to anyone attacking Obama in the manner that the Swift Boat Veterans for Truth did when they questioned Democrat John Kerry's Vietnam record during the 2004 campaign.

"Swiftboating is not going to work this time, and the reason it's not is No. 1, I'm going to smack 'em right square in the chops," Biden said.

The McCain campaign stood by its assessments of Obama.

"Barack Obama's lone accomplishment regarding education is to extend sex education to kindergartners who have yet to develop reading skills," said spokesman Ben Porritt. "His record on education as with other issues important in this campaign provides ample evidence that he is completely out of touch with the values and needs of the American people."

The fundraiser comes at a pivotal point for the Democratic ticket. Obama is the first presidential candidate since Watergate-era campaign finance reforms to reject federal financing for his general election campaign. In forgoing the $84 million that McCain has accepted, Obama is banking on his ability to exceed that sum and raise enough to counteract an expected Republican advantage in special-interest group spending.

The senator, who mounted his own unsuccessful campaign for the Democratic nomination, also said he did not automatically agree to be Obama's running mate. Biden said he did so only after Obama assured him that he agreed that the stakes were large and the American people had an unquenched yearning for change.

"I actually demanded, I actually, before I would accept the nomination, I insisted that I spend three hours with him," Biden said of Obama. "... I wanted to hear from his own lips that he understood and believed that this was such an incredible moment."

In between his two Massachusetts events, Biden squeezed in a quick town hall forum in Nashua, N.H., where housing market worries topped voters' concerns. One question came from a real estate agent, another from a man who decried mortgage giants Fannie Mae and Freddie Mac as corrupt.

Biden criticized McCain for comments he made in March warning against vigorous government action to solve the mortgage crisis.

"He said it's not the role of government to bail out big banks or small borrowers. Ladies and gentleman, that's failing to make a distinction between the predator and the preyed upon," Biden told an audience at Nashua Community College.

McCain's actual comment was, "It's not the duty of government to bail out and reward those who act irresponsibly, whether they are big banks or small borrowers."