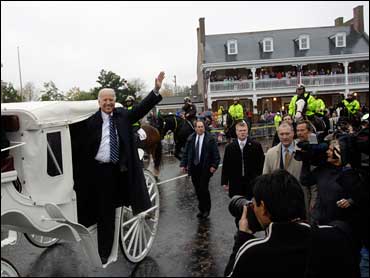 Vice president-elect Joe Biden, riding in a horse-drawn, white carriage with his wife, Jill, received a hero's welcome Thursday on his first trip home since the election.

Biden was the star attraction at the Delaware postelection tradition known as Return Day, when winners and losers of political contests get together to symbolically "bury the hatchet" and end the campaign season.

"It feels great, it feels great," Biden said as he waved to crowds lining the streets of this southern Delaware town. "This is home."

Biden's carriage, preceded by a motorcycle escort and followed by mounted police, led a parade that wound through the center of town.

While the tradition calls for winners and losers to ride together, Biden's Senate challenger, Christine O'Donnell, rode in a separate carriage. O'Donnell said she was told that the Biden camp preferred they not ride together, but that she understood security concerns had to be taken into account.

Security was heavy throughout the event, and roads into town were barricaded Thursday morning. Unlike previous Return Days, visitors were required to pass through metal detectors before entering the town circle.

"Hey folks!" Biden, who represents Delaware in the Senate, shouted repeatedly to onlookers who stood for hours in the rain to catch a glimpse of the next vice president. Many screamed loudly in celebration of the Barack Obama-Biden victory in Tuesday's presidential race.

"We love you, Biden!" a woman yelled as the carriage passed.

In brief remarks to the drenched crowd assembled in front of a stage where dignitaries gathered, Biden said he would remain true to Delaware, no matter what office he holds.

"I may be the vice president-elect, but we're going to be home every weekend," he said, adding that senator "is the proudest title I've ever had."

He won't have it for much longer, however. While easily beating O'Donnell to win re-election to a seventh term, Biden will have to resign from the Senate before being sworn in as vice president on Jan. 20.

Democratic Gov. Ruth Ann Minner is expected, before she leaves office, also on Jan. 20, to appoint a replacement to fill the seat until the 2010 election.

Minner said she has not settled on a choice and that she has not talked to Biden, but will listen to his input.

"Joe Biden and I have been friends since 1972, and I value his counsel so much," Minner said, nevertheless affirming that "it's my decision."

Biden didn't give away any secrets when an AP reporter asked about the future of his Senate seat.

"We're going to spend some time thinking about it," he said. "I'll be spending some time talking to my friends."