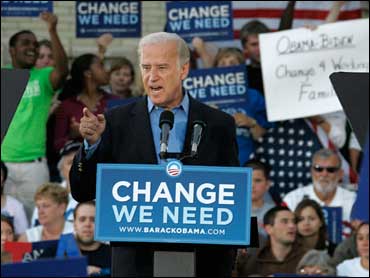 Democratic vice presidential candidate Joe Biden said Thursday that paying more in taxes is the patriotic thing to do for wealthier Americans. The Republican campaign for president calls the tax increases their Democratic opponents propose "painful" instead of patriotic.

Under the economic plan proposed by Democratic presidential candidate Barack Obama, people earning more than $250,000 a year would pay more in taxes while those earning less - the vast majority of American taxpayers - would receive a tax cut.

"We want to take money and put it back in the pocket of middle-class people," Biden said in an interview on ABC's "Good Morning America."

Noting that wealthier Americans would indeed pay more, Biden said: "It's time to be patriotic ... time to jump in, time to be part of the deal, time to help get America out of the rut."

Republican presidential candidate John McCain released a television ad Thursday charging that Obama would increase the size of the federal government amid an economic crisis. Contending that "a big government casts a big shadow on us all," the ad features the image of a shadow slowly covering a sleeping baby as it exaggerates the reach of the Obama tax proposal.

"Obama and his liberal congressional allies want a massive government, billions in spending increases, wasteful pork," the ad says. "And we would pay - painful income taxes, skyrocketing taxes on life savings, electricity and home heating oil. Can your family afford that?"