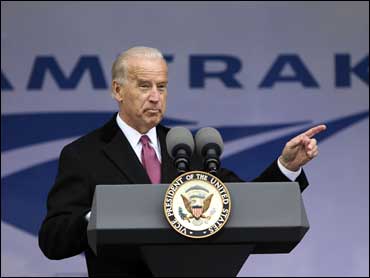 While in the Senate, Biden was known for his regular Amtrak trips between Washington and Wilmington, Delaware. Today he directly took on critics of outlays for the rail system on which he says he has taken 7,000 roundtrips over the years.

"Every, every, every, every passenger rail system in the world relies on subsidies," Biden said, according to CBS News White House Correspondent Mark Knoller. "We subsidize our highways and airports more than we subsidize Amtrak. So let's get something straight here. Amtrak has not been at the trough. Amtrak has been left out."

With an Amtrak locomotive providing the backdrop, the vice president said that if the northeast corridor of Amtrak were shut down, seven new lanes would need to be built on interstate 95. He added that over 28 million passengers ride Amtrak every year, including 80,000 per day.

"For too long, we haven't made the investments we needed to make Amtrak as safe, as reliable, as secure as it can be," Biden said. "That ends now. The funds in the Recovery Act for Amtrak will help create jobs and at the same time, repair and update critical needs of our nation's infrastructure."

The vice president added that the work that will be done is the right kind for America because it will "take care of needs, put people to work immediately and reap benefits for years to come."