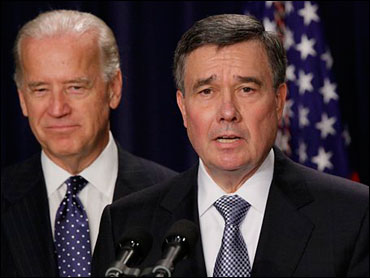 Biden, who was central to the creation of the Office Of National Drug Control Policy, said the economy suffers $350 billion a year in costs resulting from drug and alcohol abuse – and said there is an "even bigger cost in human suffering."

Kerlikowske, meanwhile, said that reducing illegal drugs is "largely dependent on our ability to reduce demand for them – and that starts with our youth."

He referenced on his own stepson Jeffrey's drug arrests, noting that "in my own family, I have experienced the effects that drugs can have on our youth, our families and our communities."

According to the Washington Times, Kerlikowske's stepson is now being held without bail in a Florida jail, apparently because of a parole violation.

As director of the Office Of National Drug Control Policy, Kerlikowske would coordinate drug policy across the government. The nomination is subject to Senate confirmation.

Kerlikowske has been Seattle's police chief for nine years and has 36 years of law enforcement experience, and during his tenure in Seattle crime rates have fallen to record lows.

Biden stressed that Kerlikowske faces "daunting" challenges in the Southwest thanks to drug trafficking from Mexico, a concern echoed by President Obama in a statement on Kerlikowske's nomination.

"With escalating violence along our Southwest border and far too many suffering from the disease of addiction here at home, never has it been more important to have a national drug control strategy guided by sound principles of public safety and public health," the president said. "We must demonstrate to our international partners, the criminal organizations threatening to undermine stability and the rule of law in those nations, and the American people, that we take seriously our responsibility to reduce drug use in the United States."

Biden, who lauded drug courts, prisoner re-entry programs and the Community Oriented Policing Services (COPS) program in his remarks, added in a statement that Kerlikowske "understands that combating drugs requires a comprehensive approach that includes enforcement, prevention and treatment."

President Obama has specified that drug czar will no longer be a Cabinet-level position, as it was under President George W. Bush, though the White House stresses that Kerlikowske will have direct access to the president.