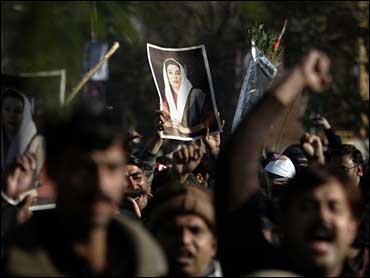 An Islamic militant group said Saturday it had no link to Benazir Bhutto's killing and the opposition leader's aides accused the government of a cover-up, disputing the official account of her death.

The government stood firmly by its account of Thursday's assassination and insisted it needed no foreign help in any investigation.

"This is not an ordinary criminal matter in which we require assistance of the international community. I think we are capable of handling it," said Interior Ministry spokesman Javed Iqbal Cheema.

Bhutto's aides said they doubted militant commander Baitullah Mehsud was behind the attack on the opposition leader and said the government's claim that she died when she hit her head on the sunroof of her vehicle was "dangerous nonsense."

Democratic presidential candidate Hillary Rodham Clinton called for an independent, international investigation into Bhutto's death perhaps by the United Nations — saying Friday there was "no reason to trust the Pakistani government."

Attackers opened fire at a motorcade of Bhutto's supporters as they returned to Karachi after her funeral, killing one man and wounding two, said Waqar Mehdi, a spokesman for Bhutto's party. The government said mass rioting has killed 38 people and caused tens of millions of dollars in damage.

In Rawalpindi, thousands of Bhutto supporters spilled onto the streets after a prayer ceremony for her, throwing stones and clashing with police who fired tear gas to try and subdue the crowd.

President Pervez Musharraf told his top security officials that those looting and plundering "must be dealt with firmly and all measures be taken to ensure (the) safety and security of the people," the Associated Press of Pakistan reported.

Nine election offices in Bhutto's home province of Sindh in the south were burned to the ground, along with voter rolls and ballot boxes, the commission said in a statement. The violence also hampered the printing of ballot papers, training of poll workers and other pre-election logistics, the statement said.

The U.S. government, which sees nuclear-armed Pakistan as a crucial ally in the war on terror, has pushed Musharraf to keep the election on track to promote stability, moderation and democracy in Pakistan, American officials said.

Prime Minister Mohammedmian Soomro said Friday the government had no immediate plans to postpone the election, despite the violence and the decision by Nawaz Sharif, another opposition leader, to boycott the poll.

Bhutto's Pakistan Peoples Party also called a meeting Sunday to decide whether to participate in the vote. Her widower, Asif Ali Zardari, told the British Broadcasting Corp. that their son would read a message left by Bhutto and addressed to the party in event of her death.

Roads across Bhutto's southern Sindh province were littered with burning vehicles, smoking reminders of the continuing chaos since her assassination Thursday. Factories, stores and restaurants were set ablaze in Pakistan's biggest city, Karachi, where 17 people have been killed and dozens injured, officials said.

The government blamed Bhutto's killing on al Qaeda and Taliban militants operating with increasing impunity in the lawless tribal areas along the border with Afghanistan. It released a transcript Friday of a purported conversation between Mehsud and another militant, apparently discussing the assassination.

"It was a spectacular job. They were very brave boys who killed her," Mehsud said, according to the transcript.

But a spokesman for Mehsud, Maulana Mohammed Umer, denied the militant was involved in the attack and dismissed the allegations as "government propaganda."

"The fact is that we are only against America, and we don't consider political leaders of Pakistan our enemy," he said in a telephone call he made to The Associated Press from the tribal region of South Waziristan, adding that he was speaking on instructions from Mehsud.

Cheema said the government had evidence to back its claim.

"I don't think anybody has the capability to carry out such suicide attacks except for those people," he said.

Bhutto's Pakistan Peoples Party accused the government of trying to frame Mehsud, saying the militant — through emissaries — had previously told Bhutto he was not involved in the Karachi bombing.

"The story that al Qaeda or Baitullah Mehsud did it appears to us to be a planted story, an incorrect story, because they want to divert the attention," said Farhatullah Babar, a spokesman for Bhutto's party.

After the Karachi attack, Bhutto accused elements in the ruling pro-Musharraf party of plotting to kill her. The government denied the claims. Babar said Bhutto's allegations were never investigated.

Bhutto was killed Thursday evening when a suicide attacker shot at her and then blew himself up as she left a rally in the garrison city of Rawalpindi near Islamabad. The attack killed about 20 others as well. Authorities initially said she died from bullet wounds, and a surgeon who treated her said the impact from shrapnel on her skull killed her.

But Cheema said she was killed when she tried to duck back into the armored vehicle during the attack, and the shock waves from the blast smashed her head into a lever attached to the sunroof, fracturing her skull, he said.

Bhutto's spokeswoman Sherry Rehman, who was in the vehicle with her boss, disputed the government's version.

"To hear that Ms. Bhutto fell from an impact from a bump on a sunroof is absolutely rubbish. It is dangerous nonsense, because it implies there was no assassination attempt," she told the BBC.

"There was a clear bullet wound at the back of the neck. It went in one direction and came out another," she said. "My entire car is coated with her blood, my clothes, everybody — so she did not concuss her head against the sun roof."

The government said it was forming two inquiries into Bhutto's death, one to be carried out by a high court judge and another by security forces.

Train service in parts of the south were suspended because "of the bad law and order situation," a rail official said, speaking on condition of anonymity because he was not authorized to speak to the media.