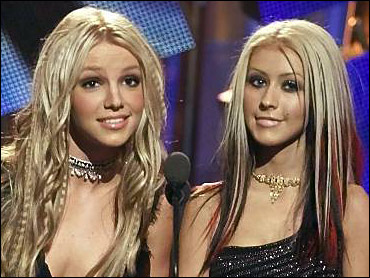 The pop stars, who both kissed Madonna a few months ago during a performance at the MTV Video Music Awards, are now trading insults about each other's careers and personalities.

In the December issue of Blender magazine, Aguilera said of Spears, "She seemed very distant, even during rehearsals. Every time I tried to start a conversation with her - well, let's just say she seemed nervous the whole time. ... She seems to me like a lost little girl, someone who desperately needs guidance."

Spears responds in the magazine's January issue, "I can't believe Christina said that about me."

Then she relates a story about seeing Aguilera, her former friend and fellow Mouseketeer, for the first time in two years: "She comes up to me in a club in front of all these people and tries to put her tongue down my throat!

"I say, 'It's good to see you,' and she goes, 'Well, you're not being real with me.' I was like, 'Well, Christina, what's your definition of real? Going up to girls and kissing them after you haven't seen them for two years?'

"A lost girl?" Spears says. "I think it's probably the other way around."