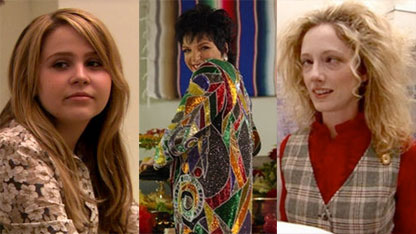 (The Insider) It was a foregone conclusion that should Arrested Development return in any capacity, all the major players from The Bluth Family (Jason Bateman, Will Arnett, Portia de Rossi, Tony Hale, Jessica Walter, Jeffrey Tambor, Michael Cera, Alia Shawkat, David Cross) would all be back. But given the wonderfully warped world Mitch Hurwtiz created over three tremendous seasons, everyone wondered which supporting players would be returning as well.

RELATED - New Arrested Eps Are 'Ever-Evolving' According to Creator

Recent weeks have revealed some gems, and now one more name joins the list: Mae Whitman! The actress, who played Ann "Her?" Veal, over 12 episodes told Hollywood.com, "I definitely, definitely wouldn't ever let this chance go by without being a part of it. I told Mitch that I would stand outside the sound stage until he would let me just walk through the background or something. You can definitely expect to find a little bit of Ann hiding in the background somewhere, at least."

Ann is just the latest ex-lover of one of The Bluth boys confirmed to be coming back. Buster's ex Lucille 2 (played by Liza Minnelli) and George Sr. & Gob's shared piece Kitty Sanchez (played by Judy Greer) will both play into upcoming storylines.

And while I wouldn't want to overload the already large cast with further additions, here are a few more characters I'd love to see return!