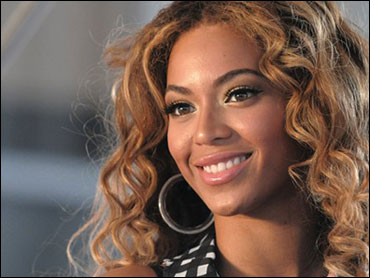 Country crossover sensation Taylor Swift- the year's best-selling artist outside of the late Michael Jackson - wasn't far behind Beyonce. The 19-year-old got eight nominations, including album of the year for her multiplatinum sophomore disc "Fearless," as well as song and record of the year for her hit, "You Belong With Me."

Swift, who has won everything from American Music Awards to Country Music Association trophies to that now-infamous MTV Video Music Award moonman, said her Grammy nominations represented the apex for her.

"To be recognized by the Grammys is the ultimate honor," said Swift in a telephone call shortly after finding out about her nominations. "The last couple of months has been a nonstop dream come true."

Another diva was also nominated in all three categories: Lady Gaga. The eccentric entertainer, who had five nominations overall, garnered a best album mention for her debut CD, "The Fame," while her "Poker Face" got nominations for record and song of the year.

Other nominees for album of the year included the Black Eyed Peas "The E.N.D." and Dave Matthews Band's "Big Whiskey and the Groogrux King."

The Black Eyed Peas were also nominated for record of the year for their feel-good song, "I Gotta Feeling," while the Kings of Leon were nominated for "Use Somebody."

The Kings of Leon hit was also nominated for song of the year, as well as Maxwell's comeback hit, "Pretty Wings."

The Black Eyed Peas, Maxwell and Kanye West got six nominations each, while Jay-Z and DJ David Guetta got five.

The country act the Zac Brown Band was nominated for best new artist, along with R&B siren Keri Hilson, rockers MGMT, the punk duo the Ting Tings and the rock group the Silversun Pickups. The year's most popular new artist, Lady Gaga, wasn't in the category because she wasn't eligible; her single "Just Dance" had been nominated last year, before she was a platinum-selling act; previous Grammy nominees can't be nominated in the category.

Recording Academy President Neil Portnow said that scenario won't likely happen again: "There will be some changes so that that particular situation won't repeat itself."

The nominations for the Grammys, to be held Jan. 31, were unveiled as part of a prime-time CBS special. It was the second year in a row that the Recording Academy revealed a handful of its 109 nominees during a televised concert; in the past, they had been announced during a morning news conference.

But Wednesday's special gave nominees the chance to perform, such as the Black Eyed Peas, who sang their ubiquitous hit, "I Gotta Feeling," as well as provided face time for CBS' stars, like LL Cool J, the rapper-actor who is the star of "NCIS: Los Angeles."

Maxwell performed a tribute to Jackson during the special; for Maxwell, the night was a culmination of his comeback after an eight-year layoff.

"This is very surreal for me. I'm not used to this," said Maxwell. "I've been throwing out my trash, buying my milk, and living in basic obscurity ... To come back and make a record based on my own living experiences and not on my desire to be No. 1 ... I feel like I've already won. If nothing comes of it it's already like the cherry on the cake for me."