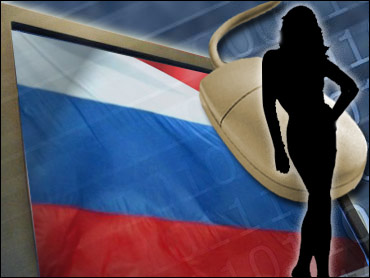 He says his job as a Moscow gumshoe is right out of the movies. His name is Vladimir, an undercover detective hunting down Russian women who bill themselves online as brides. As CBS News Correspondent Thalia Assuras reports, their prey is American men.

Garrett is Vladimir's boss back here in the United States. A Russian bride herself, she now helps clients find out if their online love is real or an Internet phantom.

"He gives us her name, age and everything, and we come back in three days and we say, 'There is no such girl,'" says Garret. "Such girl does not exist."

The scams often originate in Russia's Internet cafes, enticing men with photos and letters - eventually asking for money to help with visas and airline tickets. The U.S. Embassy in Moscow hears from the jilted every day.

"I'm a little surprised at the sheer volume - three to four a day is pretty significant and you have to bear in mind that we're probably not receiving all of the complaints," says James Pettit, the U.S. Consul General in Moscow.

The State Department calls these "Boris and Natasha" scams: a lonely bachelor - say here in Arizona - thinks he's romancing "Natasha," falling in love, but it turns out "Natasha" is really "Boris."

In Tempe, Arizona, Steve Coffman believed he was approached by a woman on an Internet dating service.

One of the amorous e-mails sent to him read: "I feel you Steve, we are one in heart, spirit, soul mates."

"I was pinching myself to see if I was awake or if this was a dream, you know," says Coffman.

He discovered his soul mate appeared on multiple Web sites under multiple names but not until he had given away his heart and his cash.

"One big warning, do not send money for visa and tickets," says Garrett.

But thousands do and that keeps detective Vladimir very busy.