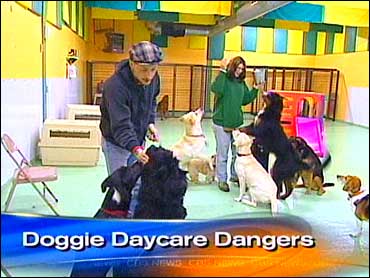 There are 74 million dogs and 88 million cats in homes nationwide, and pet owners can't watch all of them all day, every day.

Professional pet care services are available to help but, warns The Early Show's resident veterinarian, Dr. Debbye Turner, some could hurt Fido or Fluffy instead.

Just 10 years ago, doggy daycare was unheard of. Now, there are more than 4,000 canine kindergartens around the country, a booming part of a $16 billion dollar pet services industry.

There's no federal oversight of pet boarding facilities or pet sitters, Turner points out, and animals are being mistreated by untrained caregivers and sometimes other pets. Injuries and even deaths occur.

Because of the lack of regulation by Washington, Turner says, there's no way of knowing the total number of deaths and injuries incurred at animal day care centers, kennels, or under the watch of sitters.

But incident reports Turner found from across the country are enough to make any pet owner wary.

She says one of her dogs suffered a severe eye injury in a kennel, so the next time she needed pet care, she used a pet sitter who, it turned out, "not only failed to take him out on a leash, but he failed to ensure that the gates were closed." Her dog was hit by a car and killed.

Stories like those are popping up nationwide, Turner observes.

He was "all we had," Schubert told Sallinger.

The Alpine Dog House, where the dog was being watched, broke the news of his death with a phone message.

Sallinger's investigation found that the Colorado Sate Agriculture Department reports as many as 10 deaths and injuries to dogs at daycare and boarding facilities since 1995.

Colorado law mandates one human supervisor for every 15 dogs, but when KCNC took its probe undercover, it found the only one watching the dogs were its cameras.

The Better Business Bureau reports that complaints about pet boarding and pet sitting have more than doubled in the last five years.

So, how can people find reputable pet care facilities?

Ask friends, neighbors, veterinarians, local shelters, local trainers, and others for references, Turner urges. "They're gonna know when bad things have happened, and they'll be able to lead you in the right direction. Check those references!

To see advice from the Humane Society of the United States on picking a pet care facility, click here.

Six-Word Memoirs Can Say It All
View CBS News In
CBS News App Open
Chrome Safari Continue
Be the first to know
Get browser notifications for breaking news, live events, and exclusive reporting.