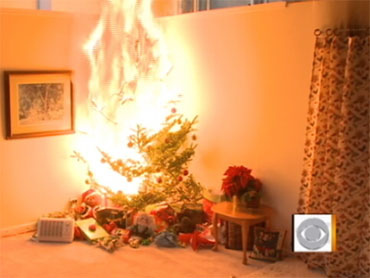 Holiday decorating can be fun, but it can also cause some serious fire hazards. Susan Koeppen will be here with some safety tips for the holiday season.

Now's the time for stringing the lights and trimming the tree, but are your decorations dangerous? They could be.

"Early Show" Consumer Correspondent Susan Koeppen said on the broadcast Friday, "Counterfeit extension cords and Christmas tree fires are major concerns during holiday time. So, as you dust of your old Christmas decorations this season, be careful, because they just might be a serious fire hazard."

The lights, the trees, the decorations, Koeppen noted, can make for a beautiful time of year, but also dangerous.

Brett Brenner, president of the Electrical Safety Foundation International, told CBS News, "People are using more energy than they're used to and intrinsically you have more things around that can catch fire."

According to the National Fire Protection Association, Christmas tree fires cause more than $16 million worth of property damage each year. Holiday lights account for nearly $9 million in damage.

Brenner said, "It's very important you're making sure those devices are safe in your home."

To see firsthand what happens when decorations turn disastrous, Koeppen went to the State Farm Research Lab outside Chicago.

On a Christmas tree, they put a string of lights with a frayed wire. When they plugged it in, the wire began to smoke, and within seconds the tree totally caught on fire.

Brenner said, "We're in a controlled laboratory setting with 30 to 50-foot ceilings, you can imagine what would happen in a home with eight-foot ceilings."

Experts from the Electrical Safety Foundation International say counterfeit lights and extension cords can also be a huge problem during the holidays.

Brenner said, "Many times they're using less expensive materials, which actually cause the fire itself. The wires inside the devices will not support the load. It really creates and dangerous situation."

In another test at the lab, they put a counterfeit extension cord with a space heater. First smoke, then fire.

Brenner said, "It caught fire so quickly it was even surprising to me. The fact is, if that was behind someone's couch or in someone's home, that could definitely start a home fire."

"Respect electricity," Brenner said. "Electricity is great when it works, but it's uniquely unforgiving in that it can easily start a home fire."

Koeppen added on "The Early Show" if you're going out to buy a real tree, look for one that has fresh green needles.

She said, "And make sure you water the tree. A dry tree can go up in flames in a snap. Keep it about three feet from any heat source like a fireplace or radiator."

And if you're buying a fake tree, she said look for one that says "fire resistant."

Koeppen said this year might be a good time to buy new lights, as well.

"Look for LED holiday lights," she said. "They are cooler to the touch, and can save you some money on your electric bill."