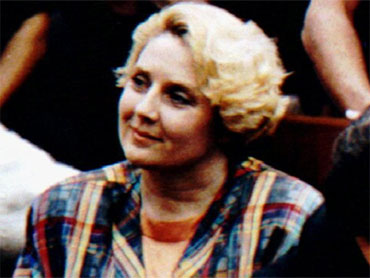 (CBS/AP Photo)
CHINO, Calif. (CBS/AP) Two decades ago, San Diego socialite Betty Broderick drew national attention for fatally shooting her ex-husband and his new wife in their bed. Today Broderick, who became the subject of a book and two TV movies, has her first date with a parole board, and she's likely to make a bid for freedom based on her claims that years of emotional abuse by her lawyer-husband drove her to kill.

The 62-year-old was convicted in 1991 of second-degree murder and sentenced to 32 years to life in prison. The case produced lurid headlines with details of the battles between Broderick and her prominent husband, Daniel Broderick III.

Broderick admitted killing her 44-year-old ex-husband and his new wife, Linda Kolkena Broderick, 28, in their bed on Nov. 5, 1989. She portrayed herself as the victim of a heartless man who had discarded her for a younger and slimmer woman, and then used his legal skills and clout with the local judiciary to gain unfair advantages in the divorce settlement and child custody hearings.

Broderick admitted bombarding him with obscene telephone calls, smearing a Boston cream pie on his clothes and driving her truck through his front door.

It took two trials to convict her. The first ended in a hung jury and the foreman was quoted as saying of the shootings: "We just wonder why it took her so long."

During six days of emotional testimony at the second trial, Broderick said she crept into the couple's bedroom before dawn planning only to confront them or to kill herself. She said she didn't aim the gun and didn't remember pulling the trigger.

After 18 years in prison Broderick is expected to tell the parole board her ex-husband relentlessly abused her and pushed her past an emotional breaking point.