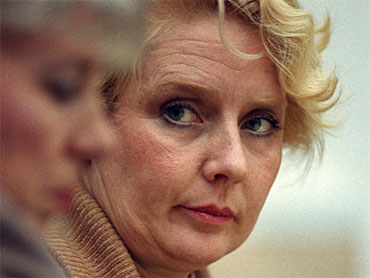 (AP Photo/San Diego Union-Tribune)
CHINO, Calif. (CBS/AP) Former San Diego socialite Betty Broderick was denied parole Thursday for fatally shooting her ex-husband and his new wife in their bed in 1989. During the 5-hour hearing, Broderick's own four children were divided on whether she should be set free.

Photo: Betty Broderick in the courtroom during her trial for murder at the San Diego County Courthouse in 1991.

Broderick, now 62, claimed she didn't intend to kill anyone when she went to the home of her former husband, Daniel Broderick III. She said she had violent thoughts as she approached the home.

"I had one choice: to shoot them or myself," Broderick recalled thinking. "I couldn't let them win."

Kathy Lee Broderick, 38, said she wanted her mother to come live with her, even though she still misses her slain father.

"She should be able to live her later life outside prison walls," she said.

However, her younger brother, Dan Broderick, 33, said his mother was "hung up on justifying what she did."

"In my heart, I know my mother is a good person," he said. "But along the way she got lost. Releasing a lost person into society could be a dangerous mistake."

Betty Broderick told the board her "whole world fell off its axis" when her husband left her and won custody of the children. "I couldn't get a settlement, and I couldn't get the kids," she said. "... I allowed the voices in my head to completely take over."

"Your heart is still bitter, and you are still angry, said Board of Prison Terms Commissioner Robert Doyle. He continued, "You show no significant progress in evolving. You are still back 20 years ago in that same mode. You've got to move on."

The parole denial was for the longest term possible, 15 years, although Broderick can still reapply for release in three years if she makes progress.