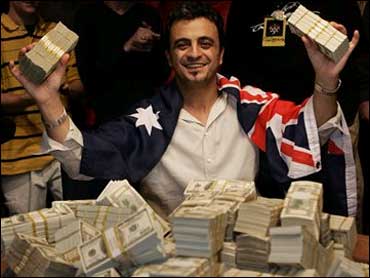 When he was eliminated from the main event of the World Series a few years ago, former world champion Chris "Jesus" Ferguson told an interviewer that "The worst day of the poker year is when you bust out of the championship event." Boy, do I know now what he meant.

When I was eliminated late on Day Two, within shouting distance of my goal to finish "in the money" in the main event for the first time, the disappointment was crushing. It blocked out everything else.

Within an hour, it was replaced by an overwhelming desire to do it again better, right away. If they had started another championship event the next day, I would have done everything in my power to find a way to play in it, to prove to myself that I could achieve my goal if I just got my fair share of cards and luck. I wanted to fast forward the clock 12 months and try again, without having to wait a whole year for another chance.

I flew home and reentered my real life -- family responsibilities, the demands of work, chores, diet, exercise, doctors and dentists. These are all the things that poker lets you escape from for a brief while. A few days later my wife and I were sitting at the kitchen table with the kitchen calendar in front of us, planning the Fall weekends when we would visit our daughters and grandson in New York and Boston.

Available weekends were scarce, as we had already scheduled a weekend visit to North Carolina to visit that branch of the family, and several other weekends were committed as part of our summer beach vacation. Much of October was blocked out for a twice-postponed trip to China. After adding in a few other social commitments and subscription theatre dates, there were not many free weekends left before Christmas.

After talking to the kids (do our adult children ever stop being our "kids"?) and coordinating our Fall visits with their calendars, I realized I had not set aside any time to play in any poker tournaments this Fall. In past years, I have usually played either the Taj Mahal or Borgata tournament in Atlantic City and the World Poker Open at Foxwoods.

I went to the computer and downloaded the scheduled dates for all three tournaments. When I compared the tournament dates with the commitments already filled in on the kitchen calendar, I saw that playing on the weekends would mostly be out. But if I could manage my work schedule successfully, I could play in one or two events at each tournament on week days.

Now I have to confront another obstacle. I hate that my wife is right all the time. Before I left for the World Series, she predicted that in the year ahead I would be traveling more to play in poker tournaments.

Her point was that I was already committed to hosting a weekly game at home, another monthly game, and had recently joined a second monthly game hosted by another player in my area. Add the World Series trip, and a trip to the Bahamas, and it is getting to be a bit much as far as she is concerned.

I disagreed with her prediction, but assured her in any case that if my level of tournament activity increased, I would decrease my commitment to the other games accordingly.

From what I hear, my problem is shared by men everywhere -- be they golfers, hunters, fishermen or poker players. How much time away from hearth and home (and job) can I manage for my favorite hobby, without doing irreparable harm to important relationships and responsibilities?

One of the attractions of playing tournaments on the Internet is that you can play whenever you have a few free hours, day or night, without leaving home. That will probably become part of my solution -- fewer live tournaments that require days away from home, and more tournaments played in bed at night.

I have started down that path. Not having played much on the Internet before, I am finding it an interesting experience. The style of play is definitely different than what I am used to encountering at live tournaments in the past. More people play more hands and bluff more (or bet aggressively believing they have the best hand when they don't) than in the live tournaments I have played in past years. I will have to adjust my play accordingly.

Only 11 and a half months to go before the 2006 World Series. I keep hearing the voice of Larry Bird, the former Boston Celtic great. He was interviewed once about his years growing up in Indiana, where he would spend hours and hours every day shooting foul shots against a barnside hoop on the family farm, even after the sun had set. He described how whenever he was not practicing his shooting, he was keenly aware that someplace else someone else was working to improve their game and he was falling behind.

That is how I feel sometimes. I am not in a position to spend 10 hours a day playing multiple Internet games, like some of the 20-something young guns who have invaded tournament poker en masse. I have to accept the fact that while I am doing other things, they are single-mindedly practicing for next year's WSOP and are getting better. It will get tougher and tougher each year to reach my goal. But I don't intend to quit trying.