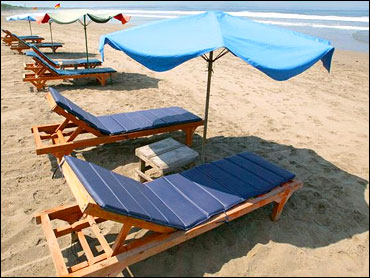 Beach closings and health warnings due to pollution declined last year even as local officials were more vigilant in monitoring shorelines for problems, an environmental group reported Wednesday.

The number of beach closures and advisories in 2002 declined by 9 percent from a year earlier, the Natural Resources Defense Council said in its 13th annual assessment of beach water quality.

Using data from the Environmental Protection Agency and its own information-gathering, the group said there were at least 12,184 closings and swimming advisories at ocean, bay, Great Lakes and some freshwater beaches in 2002. That was down from a record 13,410 closings and advisories in 2001.

Some 87 percent of the closures and advisories were issued because monitoring revealed the presence of unhealthy bacteria with fecal contamination.

The group said California and East Coast droughts last year contributed to reducing pollution-causing runoff, but added that too many beaches still had sewage and runoff problems.

"Most of the closings and advisories are caused by human-caused pollution," said Nancy Stoner, director of organization's Clean Water Project. "What's most disturbing is that local officials have no idea what's causing over half the closures."

When a source for the beach water contamination was found, it was usually polluted runoff and stormwater, or sewage spills and overflows. Local authorities, however, identified the source of the pollution only 38 percent of the time.

The group also named 55 busy beaches where authorities did not regularly monitor and routinely notify the public when health standards were exceeded, did not use EPA reporting criteria and had a known source of pollution. Among the most popular of them were Lake Nacimiento in California and Frenchman's Bar on the Columbia River in Vancouver, Wash.