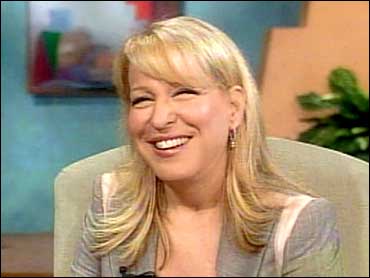 If "national treasure" were listed in the dictionary, Bette Midler's picture may be nearby.

For almost four decades, she has been entertaining audiences in every medium possible. Her latest project brings her back to the big screen in the comedy "The Stepford Wives," a remake of the 1975 thriller.

The twist in the new film, Midler tells The Early Show co-anchor Rene Syler, is comedy. But movies are cautionary tales.

Midler notes the original film was done at the height of the women's movement and says, "I think what Ira Levin, who wrote the original material, was saying was: 'Beware, ladies! This could happen to you if you go too far.'"

The message in the second movie has to do more with what people will go through to achieve perfection, Midler says.

In the film, Midler plays a stereotypical New Yorker who moves to a very atypical suburban town.

"I'm Bobbi Markowitz, an Upper Westsider, and I'm a handful a real firecracker, an independent spirit," Midler explains. "My husband (Jon Lovitz) and I don't get along that well, and he's decided to move us all to Stepford, where I encounter the lovely failed network executive Joanna Eberhart, played by Nicole Kidman, and we bond over the fact that there's something wrong in this town. We both know there's something wrong in the town and we're joined by Roger Bart, who plays part of the gay couple. So we're the threesome. We're the ones who know there's something wrong, who are determined to find out what's going on."

Part of the problem is that the town's wives live to meet their husbands' every need. Asked if her husband considers her the perfect wife after being married for 20 years now, Midler says, "No" and the list of things he would love to change about her, she says "must be endless." So what is her secret for making the marriage last?

As for her professional life, having performed with success both on stage and on the screen, Midler says, like everybody else, she goes through ups and downs.

"Then," she continues, "you turn to this or that, or say, 'I've got to get a new lease,' you know, and change your wardrobe. People do that. Americans especially do that. I think in the rest of the world, people are a lot more patient with themselves and they kind of understand the cycle of life a little better than we do. We fight nature tooth and nail."

And though she no longer lives in Hollywood, she says the pressure for women is intense. She says. "I think that women are pretty competitive with each other and not as forgiving and kind as they used to be when the women's movement was starting out and everyone was saying, 'We're all sisters in this together.' Once you start fighting for jobs, it gets rougher."

Some Facts About Bette Midler