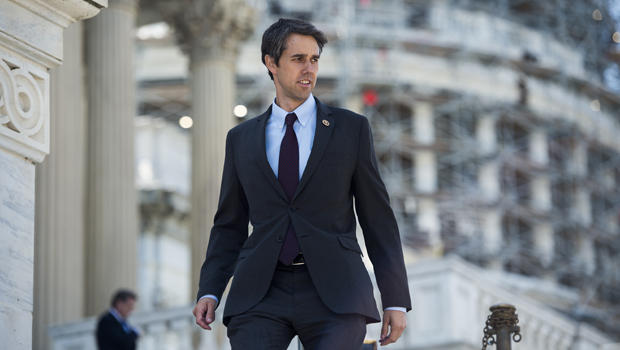 The Democrat gunning to unseat Sen. Ted Cruz in Texas is ripping a page straight out of the playbook of Sen. Bernie Sanders, framing himself as an outsider who wants to harness the grassroots and eradicate the corrupting scourge of money in politics.

Texas Rep. Beto O’Rourke, a mop-haired 44-year-old El Paso native first elected to the House in 2012, embarked on a four-city tour of Texas on Friday to launch his underdog campaign against Cruz, who is up for re-election next year.

Throughout the day, O’Rourke talked up his “people driven” campaign for Senate, eschewed big money and party labels and emphasized job creation. He even dropped a few f-bombs in front of a crowd of beer-drinkers at a bar in Dallas.

As Democrats continue soul-searching over the future of a fractured party lacking a coherent message, O’Rourke is trying to present the image of a candidate who ignores the rules of conventional politics. The particulars of his Senate bid -- the site of his campaign headquarters, for example -- remain up in the air. But what is clear is that the Spanish-speaking Democrat is working hard to show voters he won’t take marching orders from the D.C. establishment.

“I don’t know about the Democratic Party right now, but anytime we are waiting for someone out of central headquarters, waiting to figure something out, we might as well give up,” O’Rourke told CBS News. “I just know what I’m hearing in Texas, and what I feel as a Texan. There are too many people who want to work and who are skilled and can’t find that work.”

O’Rourke chatted by phone Friday as he boarded a commercial flight to Dallas, where he would meet supporters in the crowded backyard of a local brew house. No Democrat has won a statewide race in Texas in since 1994, but O’Rourke sounded bullish on his ability to connect with voters in a highly partisan environment.

“People want a full-time senator. Someone focused on this state -- not on running for President,” he said. “Someone who puts country before party and isn’t chasing big money, and believes public service is a calling and not a career.”

O’Rourke pledged to serve a maximum of two terms in the Senate, echoing the vow he made to serve no more than four terms in the House.

He didn’t hesitate when asked to say something nice about Cruz, a conservative provocateur who revels in eliciting scorn from both sides of the aisle. (Cruz’s chilly reputation among his Senate colleagues fueled joking accusations throughout the 2016 presidential campaign that he was in fact the Zodiac Killer.)

“I’ve met [Cruz] and I think he is a nice guy,” O’Rourke said. “I think he did a terrific job running for president and almost won the nomination, but did it at the expense of Texas and a Senate seat that should have been focused on the people of this state.”

“He’s a phenomenal campaigner and a smart guy,” he added.

Jeff Roe, Cruz’s 2016 campaign manager, wasted no time in attacking O’Rourke on Twitter after he announced his candidacy, calling him “more liberal than [Wendy Davis].”

Davis, a former Texas state senator who gained national attention for filibustering an anti-abortion bill, ran for governor in 2014 with the backing of many national Democrats. She was crushed when voters went to the polls, losing to now-Gov. Greg Abbott by more than 20 points.

O’Rourke does have one thing in common with Cruz: He’s a social media obsessive who believes in the power of the internet to connect directly with voters.

His social media persona is part of his strategy. O’Rourke made headlines last month when he embarked on an impromptu 1,600-mile, 36-hour road trip from Texas to Washington with Republican Rep. Will Hurd after snow grounded their flights. The duo broadcast the bipartisan marathon on Facebook Live.

To follow him on social media is to become familiar with even the most mundane details of the congressman’s life. He’s an avid user of Instagram and Snapchat. On Friday, he snapped his morning run with his dog along the U.S.-Mexico border. Later, he boarded his flight and tweeted a grinning selfie from his middle seat in coach.

O’Rourke boasted that he has more Snapchat followers than any other member of Congress and says he’ll continue to be “the most accountable and transparent person in Congress,” using social media to connect with constituents and voters he would otherwise never get the chance to meet.

But O’Rourke, who once played in a rock band and lived in Brooklyn, plans to take on Cruz directly on the issue of money in politics.

Cruz raised nearly $90 million from super PACs during his 2016 presidential campaign, with $6 million going to a single analytics firm. O’Rourke has pledged not to take PAC money from wealthy donors, instead focusing on grassroots small-dollar fundraising.

To win a statewide race in Texas, O’Rourke will have to walk a tricky line. The Lonestar State still skews Republican despite perennial Democratic dreams of a growing Hispanic population turning the state blue. O’Rourke said he’s confident he can appeal to Trump supporters as well as Democrats.

“I can’t tell you how many Trump voters have approached me in Texas,” O’Rourke said. “It’s not a matter of buyer’s remorse. They are happy with their decision, would vote for Trump again. But they’re disappointed at how ineffective government is.”

“The road to effective government runs through Texas,” he added.

This is not to downplay O’Rourke’s national progressive appeal. Shortly after O’Rourke formally entered the race, Lawrence Lessig, a Harvard academic who has carved out a side career fighting corporate money in politics, endorsed O’Rourke in a post on Medium.

“If a crazy man could be elected because he promised America he would ‘drain the swamp,’ I’m quite sure this incredibly-decent,-former-punk-rocker,-40-something,-takes-no-PAC$,-Congressman-willing-to-drive-1600-miles-in-a-car-with-a-Republican can be Texas’ next Senator,” he concluded.

O’Rourke isn’t the only Democrat with an eye on Cruz’s Senate seat. Rep. Joaquin Castro, a Democrat whose district includes San Antonio, may also throw his hat in the ring. If he does, he’ll benefit from deep connections with national Democrats who could provide key support in the primary.

Castro has been busy with the House Intelligence Committee’s investigation into Russian interference in the U.S. presidential campaign, and has said he will decide by the end of April whether to jump into the race.

“He’s a friend and I think he’d be a great candidate,” O’Rourke said of the prospect of a matchup against Castro, which would immediately become one of the most watched primaries in the country. “I told him if he runs and joins me, I want to do this in a way we make Texas proud, and I’m confident we can do that.”