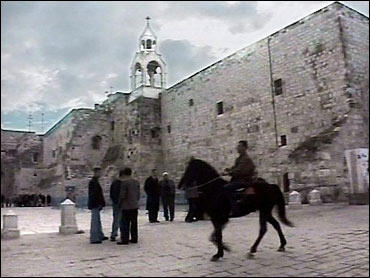 A young musician who grew up near Jesus' traditional birthplace feels the old-fashioned way of marking the holiday - hanging around Manger Square and listening to carols - is a little dull.

So Emmanuel Fleckenstein has organized a three-day battle of the bands that he hopes will attract bigger crowds to Bethlehem. City elders, worried about putting off traditional pilgrims, are keeping the wailing electric guitars and pounding drums at a safe distance from the Church of the Nativity.

Photos: Christmas Around the World

The festival's nine foreign and four local acts are mostly performing on an outdoor stage at Bethlehem University. Here, said Fleckenstein, guitar player for the Austrian pop rock band Cardiac Move, "We can get as loud as we want."

On Christmas Eve, though, Fleckenstein's four-man band gets to play in the prime venue, Manger Square, and, in a nod to the occasion, will end its 45-minute set with a rendition of "Silent Night."

The festival, modest in scale, is a sign of Bethlehem's gradual revival as a tourist attraction, after gloomy years when the Israeli-Palestinian conflict all but shut down the city.

In 2009, some 2 million tourists visited the Palestinian territories, or four times the 2007 figure, and 80 percent came to Bethlehem, said the Palestinian tourism minister, Khuloud Deibes. More Bethlehem hotels are being built, increasing the number of rooms from 2,000 to 3,000 by next year, she said.

The tourism boomlet is part of efforts by Palestinian Prime Minister Salam Fayyad to spur economic growth in the West Bank and restore a sense of normality, even as efforts to restart peace talks remain deadlocked.

In marketing Bethlehem, city officials seek to assure potential visitors that they are safe while not glossing over the hardships of life under Israeli military rule.

Bethlehem, a town of 32,000 just south of Jerusalem, is ringed on three sides by Israel's West Bank separation barrier, portrayed by Israel as a shield against suicide bombers and by Palestinians as a land grab.

Israel has eased some movement restrictions in the West Bank and pledged to facilitate the influx of pilgrims to Bethlehem, but the towering barrier continues to disrupt the lives of many in the holy city.

"We suffer from this wall of separation ... but the tourists, they are safe, they are welcome every minute and every day in this city," said Batarseh, who recently visited Indonesia and Bethlehem's sister city, Joplin, Mo., to drum up business.

Some 15,000 visitors are expected on Christmas Eve, about the same as last year, said Tony Morcos, a city official. Regardless of the turnout, many souvenir shops and local artisans now sell many of their wares through the Internet, rather than to pilgrims.

However, the global economic crisis put a damper on the demand for olive wood nativity scenes and Christmas ornaments, said Amani Juha of the Holy Land Christian Ecumenical Foundation, which helps market Bethlehem's specialties through a network of churches in the United States.

The son of a Palestinian mother and German father, he grew up in Beit Jalla, near Bethlehem. He said he had the inspiration for the rock festival after last year's family visit to Manger Square.

Traditionally, choirs sing Christmas carols in the square, as pilgrims wait for the Midnight Mass to begin in the nearby Church of the Nativity, built over the grotto where tradition says Jesus was born.

"It was really sad here, there was not much to do," Fleckenstein said of last year's festivities.

With the help of several Roman Catholic Church officials in Vienna, where he now lives, he brought the bands together. His high school friend from Bethlehem, Elias Halabi, persuaded local officials to go along.

The pair booked 13 groups and performers, including a Palestinian hip hop band, a dance troupe, a guitar-playing priest from the U.S. and a garage band from Germany.

On Monday evening, Fleckenstein's group - in addition to him, a drummer, vocalist and bass guitar player - rehearsed on the stage set up in the outdoor basketball court of Bethlehem University.

On Tuesday evening, the first day of performances, turnout was relatively light, with only about 300 people showing up. But the small crowd was enthusiastic.

"It's the first time that I hear rock music in Bethlehem," said Fida Ghareeb, 28, a project coordinator at the university. "It's live, it's Christmas and we should enjoy this time of the year."