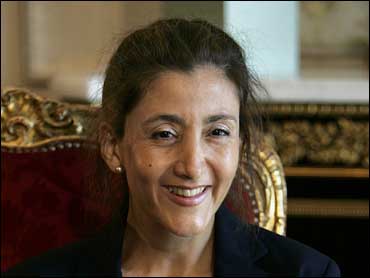 Former hostage Ingrid Betancourt said Sunday that she has no intention of suing Colombia's government for damages for the more than six years she spent as a hostage of leftist rebels.

Betancourt's statement came two days after it was disclosed she filed a damages request with the government seeking $6.8 million for her suffering during captivity.

Colombians reacted angrily to the announcement, calling Betancourt ungrateful. Their military rescued her and 14 others - including three U.S. military contractors - in July 2008.

Sounding apologetic, the 48-year-old Betancourt stressed during a Sunday television interview that she did not plan to sue the government.

But she also blamed the government for her kidnapping. She said it pulled her bodyguards - she was a presidential candidate - and denied her a helicopter that would have let her avoid the rebel-controlled road where she was seized.

Colombia's Defense Ministry issued a statement Friday expressing "surprise" and "sorrow" at her request for damages. It said Betancourt had no grounds to hold the state responsible, saying she ignored advise from security forces not to travel to the area where she was seized by the leftist Revolutionary Armed Forces of Colombia, or FARC.

Betancourt is a dual citizen of Colombia and France who now divides her time between New York and Paris.