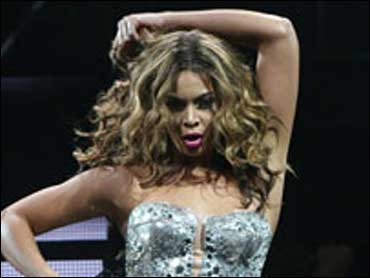 "The initial thing was just to celebrate with awards for African-Americans in ... all the entertainment fields," said Stephen Hill, executive producer of the BET Awards. "What it's grown to is a place for people to come and show off their best performances."

This year's show, to be broadcast live Tuesday night from the Shrine Auditorium, promises an A-list roster of performers, including Beyoncé, 50 Cent, Diddy, Stevie Wonder and Gladys Knight.

"We bring together different eras and different genres of music," Hill said. "It feels like a family reunion."

R&B crooner Robin Thicke, who is nominated for two awards, is scheduled to make his first appearance on the BET Awards stage.

"I was so inspired musically and culturally by BET, so to be part of this awesome celebration is an honor," he said during rehearsals Monday. "It's the staple of black entertainment on television and the outlet for so many people who didn't have an opportunity to have their art seen around the world."

The BET Awards, now in its seventh year, have become more popular as hip hop has permeated pop culture, Hill said: "If you want authentic black culture, which is now pop culture, we've become the destination."

Comedian Mo'Nique is set for her third consecutive turn as host. Awards will be presented in 14 categories, most centered on music, with prizes for the top hip-hop, gospel, R&B and new artist, as well as best group, collaboration and video. The viewers' choice award and the "Cool Like That" award also recognize music. BET Awards will also honor the best actor, actress and male and female athlete.

Diana Ross will receive a lifetime achievement award and Don Cheadle will be presented with the humanitarian award.