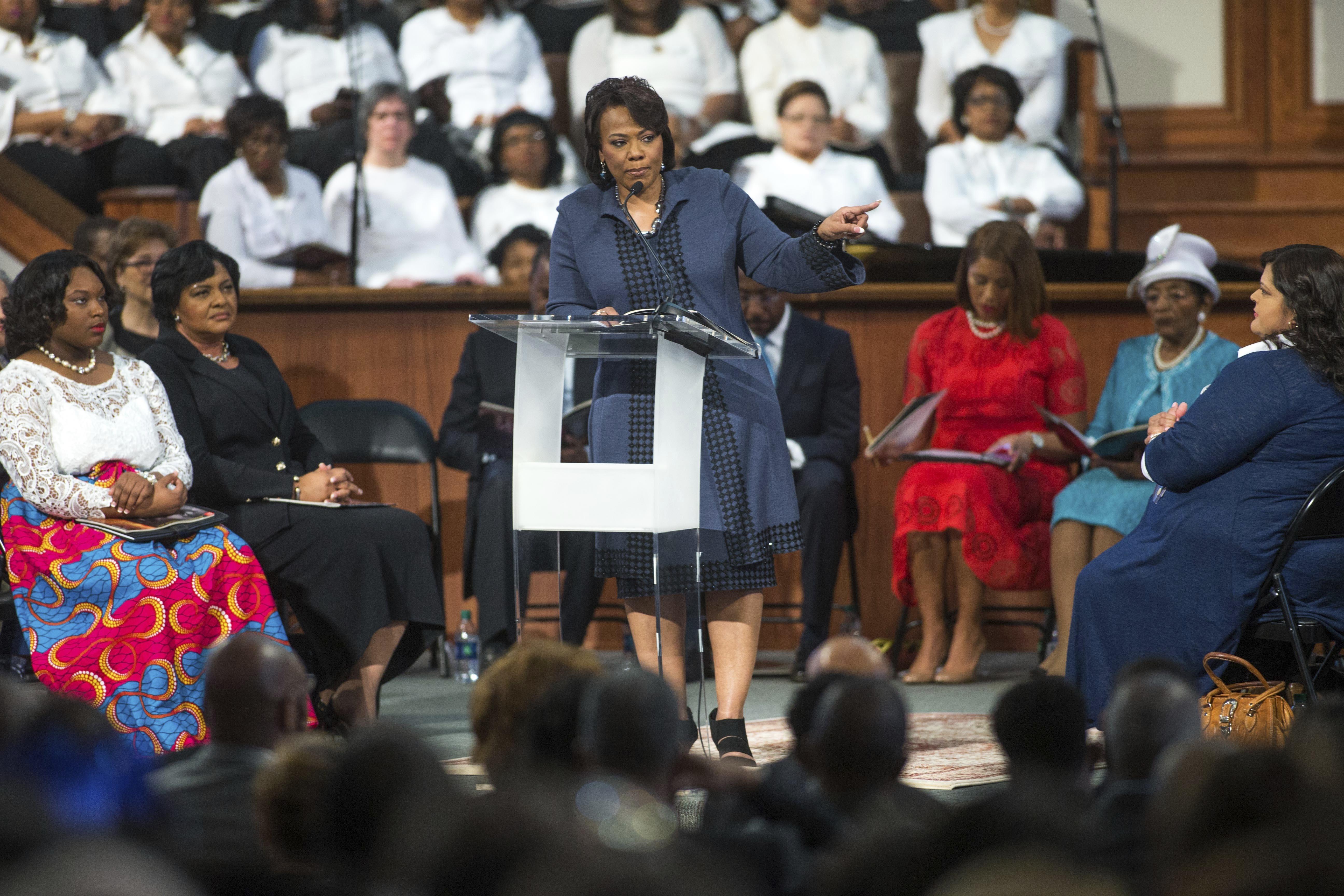 ATLANTA -- The daughter of the Rev. Martin Luther King, Jr. has told worshippers at her late father’s church that Americans should work on his vision of love and justice “no matter who is in the White House.”

Bernice King spoke at Ebenezer Baptist hours before her brother, Martin Luther King III, met privately with the president-elect at Trump Tower in New York. The younger King described the meeting as “productive.”

Bernice King avoided a detailed critique of Mr. Trump, but said the nation has a choice between “chaos and community,” a dichotomy her father preached about. “At the end of the day, the Donald Trumps come and go,” she said, later adding, “We still have to find a way to create ... the beloved community.”

The current Ebenezer pastor, the Rev. Raphael Warnock, did not call Trump by name, but praised his predecessor. “Thank you, Barack Obama,” he said. “I’m sad to see you go.”

The meeting between Mr. Trump and Martin Luther King III took place amid lingering tensions between the president-elect and Congressman John Lewis. Lewis is the civil rights leader who said Mr. Trump is not a “legitimate president” and that he will not attend the inauguration.

Earlier on Monday, Mr. Trump called on Americans to celebrate King for “all of the many wonderful things that he stood for.”

In a tweet, Mr. Trump said: “Honor him for being the great man that he was!”

President Barack Obama and first lady Michelle Obama honored King’s memory by painting a mural at a family shelter in Washington. The Obamas joined residents of the Jobs Have Priority Naylor Road Family Shelter to paint a display of the slain civil rights activist on a wall in the community room. The mural features a large rendering of King’s face surrounded by butterflies, under the words “Wall of Hope.”

Mr. Obama was working on a butterfly and told reporters he was just trying to get it right.

Other events took place nationwide. Speaking at the King Center in Atlanta on Monday, Ohio Governor John Kasich said Americans shouldn’t focus so much on the highest-level people when there are ways to tackle many societal problems at the local and individual levels. Kasich said King got the attention of people in power through a “bottom-up” approach worth emulating. He said efforts such as addressing drug use and improving education need people committed at the community level.

He also said it’s important to keep an open mind.

It was a message of cooperation from a governor who has dealt with division within his own party recently. Kasich is the Republicans’ only 2016 presidential contender who didn’t fall in line behind Mr. Trump.

Meanwhile, in Denver, several thousand people walked through the snowy city to celebrate King’s legacy in the city’s 31st annual “marade.”  The Denver Post reported that the crowd that made its way down the city’s main street, Colfax Avenue, Monday chanted and held up signs expressing love for King and opposition to Mr. Trump.

The crowd was smaller than in the last two years. Organizer Vern Howard blamed the weather and a disruption last year by Black Lives Matters.

This year during opening speeches by lawmakers, some in the crowd heckled Republican congressman Mike Coffman because of his vote to repeal the federal health care law. He continued speaking and participated in the marade.

In Minnesota, hundreds residents marched through downtown St. Paul to celebrate the life of King. Afterward, city and state leaders spoke at the Ordway Center about the progress the country as made, as well as the inequalities that still exist.

The change follows an uproar on social media that erupted after a Biloxi spokesman posted that city offices would be closed for Great Americans Day. The name came from a city ordinance adopted in 1985 -- two years after the federal holiday was created.

In Detroit, bicyclists marked the day by pedaling to sites connected to a historic visit the slain civil rights leader made to the city. About 300 bicyclists participated in Monday’s free 10-mile ride, which took in such sites as downtown Detroit’s Cobo Center. That’s where King gave an early version of his “I Have a Dream” speech in June 1963.

He also led more than 100,000 marchers down Woodward Avenue in what was called the “Great Walk to Freedom,” about two months before he delivered his famous speech in Washington, D.C.

In Memphis, Tennessee, the city where King was killed, residents honored his legacy with neighborhood events and a daylong celebration at the National Civil Rights Museum. Volunteers fanned out across Memphis neighborhoods where blight is a major problem to take part in a “MLK Day of Service.” They picked up litter and trash along streets, at blighted homes, in empty lots and in parks in historic neighborhoods such as Orange Mound and Soulsville.