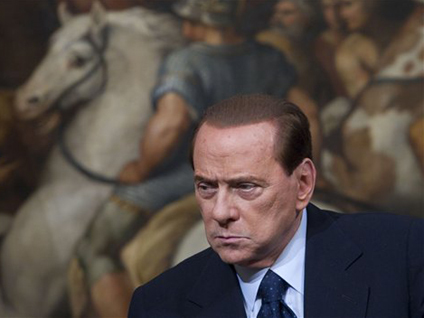 MILAN - Premier Silvio Berlusconi paid for sex with an under-age Moroccan teen 13 times at his villa near Milan, prosecutors said in a document filed Tuesday seeking indictments against three aides for allegedly soliciting prostitutes for the Italian leader.

Prosecutors have formally closed the investigation and are seeking indictments against the three aides, whom they accuse of identifying possible sex partners for Berlusconi and informing them of payment and other compensation "that they would have received for their sexual availability."

The premier separately faces trial in Milan April 6 on charges of under-age prostitution and using his influence to cover it up.

A judge must now decide whether to indict the three aides, and start a separate trial.

Berlusconi has denies all charges, and his lawyers have filed a complaint to Rome prosecutors, saying they feared a setup. Ruby also has denied having had sex with the premier, and says she has never acted as a prostitute.

Besides the Moroccan teen, Karima el-Mahroug, known by her nickname Ruby, the document identifies 32 other women whom the three aides involved in parties at Berlusconi's villa near Milan.

The prosecutors allege that aides have acted together in a criminal scheme to induce Ruby into prostitution.

The document says that Ruby "committed sexual acts with Silvio Berlusconi, for payment in cash and other compensation, at his residence" outside of Milan on 13 occasions from Feb. 14-May 2, 2010, the document says. Ruby, who has since turned 18, was 17 at the time.

The evening ended when Berlusconi chose "one or more girls with whom to spend a night of intimate relations, people who were paid sums of cash, or other compensation beyond what was given to the other participants."

"A third phase, at the end of the evening, consisted of the choice, on the part of Silvio Berlusconi, of one or more girls with whom to spend a night of intimate relations," the document said.

The three aides are Nicole Minetti -- who helped win Ruby's release from police custody last summer after she was picked up for allegedly stealing euro3,000 from an associate -- Dario "Lele" Mora and Emilio Fede, both confidantes of Berlusconi's.

The document alleges that Minetti arranged payments to the women, while Mora and Fede "identified young women disposed to prostitute themselves in the Arcore residence of Silvio Berlusconi."

The abuse of influence charge against Berlusconi is based on calls made by him and on his behalf to police to win the girl's release, allegedly to cover up their relationship.

Paying for sex with a prostitute is not a crime in Italy, but it is if the prostitute is under 18. The age limit was raised from 16 in 2006 during a campaign against underage prostitution by a previous Berlusconi government.