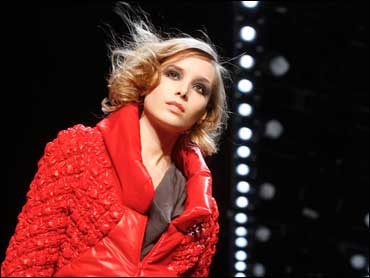 Young designers showed off edgy new clothing on Wednesday as Berlin's fashion week opened, an event that underlines the German capital's hopes of establishing itself as a fashion power.

About 30 designers are expected at Mercedes-Benz Fashion Week Berlin, which is only three years old.

Beyond Paris, New York and Milan, there are now dozens of fashion weeks across the world. Event organizers say Berlin - which has grown consistently since its start in 2007 - is now the fifth-largest.

It is dominated by German designers, but has international flair.

Berlin designer Bernadett Penkov was among those who showed off her creations on Wednesday, with thumping music propelling models down the runway.

Military uniforms provided the inspiration, but Penkov kept the look soft and feminine. Brown, tan and black fabrics made up coats, flowy dresses and suits.

Anja Gockel, a Mainz, Germany-based designer, said her 14-year-old label is participating in its second Berlin fashion week after her summer show bolstered her belief in Berlin's fashion power.

"I have to admit, I had great doubts about Berlin as a fashion capital," she said - "too little glamour, too gray."

Then her show was a hit.

"My sales went up dramatically, despite the economic crisis," she said.

"Berlin is a city which develops dramatically," he said at a news conference to kick off the fashion week. "This city is continuously on the move, and that's what makes it extremely exciting and fascinating."

Alexandra Neldel, a German actress who attended the event, said she has noticed that Berlin is getting trendier.

"You notice this when you're on the streets, how everyone dresses, that they're becoming more fashion-conscious," she said.