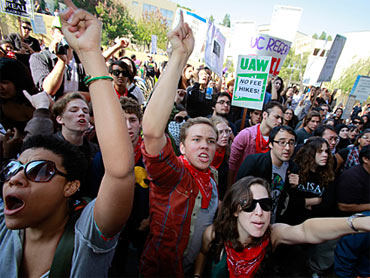 University of California Berkeley students protesting a 32 percent increase in student fees barricaded themselves Friday inside part of a campus building.

The demonstrators occupied Wheeler Hall and hung a sign out of a window that read "32 Percent Hike, 900 layoffs," with the word "Class" crossed out in red. A group of students also rallied outside the building.

Campus police said they had arrested three of the demonstrators inside.

Police would not say how many protesters remained in the building. University police Lt. Alex Yao said demonstrators were barricaded behind fire doors on the second floor, but police had control of the rest of the building.

The Daily Californian student newspaper said it received a text message from a protester inside the building who put the number still inside at 60 undergraduates and graduate students.

The occupiers were demanding the university rehire laid-off custodial workers and give amnesty to anyone arrested in the protest.

About 30 to 50 protesters staged a takeover of Campbell Hall at UCLA on Thursday, as regents met across campus to approve the fee hike. More than 50 students were arrested during protests at UC Davis.

Regents say they had to raise fees because the cash-strapped state government can't meet the university's funding needs.