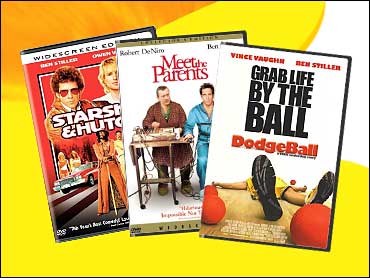 These days, when it comes to funny men in film, no one is more consistent than Ben Stiller. His "Dodgeball," which is still in theaters, recently crossed the $100 million dollar mark. It is his third hit comedy in 2004 alone.

At the same time, another Stiller comedy makes it's way to home video this week. Entertainment contributor Laurie Hibberd has all the details for The Early Show's Home Theater.

"Starsky And Hutch" was Stiller's second $90 million hit of the year. It is just the latest on a long list of successful Ben Stiller comedies available at the video store. Here's a look back at some classic moments from Stiller's hilarious resume.

Based on the 1970s police drama, "Starsky And Hutch" is about a seemingly mismatched team of San Francisco cops. Stiller and Owen Wilson played it for laughs.

Earlier this year, Stiller teamed up with Jennifer Aniston in another $90 million hit, the romantic comedy "Along Came Polly."

Stiller made a big TV splash in 1992 with "The Ben Stiller Show." The Emmy Award winning sketch comedy show ran for only 12 episodes, but was considered ahead of it's time. It's now available on a two-disc DVD set, with an additional unaired episode

Two years later, he had his first big-screen hit, as the star and director of the Gen-X comedy "Reality Bites"

He also directed, co-wrote and starred as a clueless fashion model in 2001's "Zoolander."

And in 2000, he co-starred with Robert DeNiro in the blockbuster hit, "Meet The Parents."

But Stiller's biggest hit to date is his 1998 pairing with Cameron Diaz in the Farrelly brothers classic, "There's Something About Mary," which took in $370 million at the worldwide box office

Next up for Stiller is "Meet The Fockers," a sequel to "Meet The Parents." In this one, we get to meet his character's parents, who are played by Dustin Hoffman and Barbra Striesand.