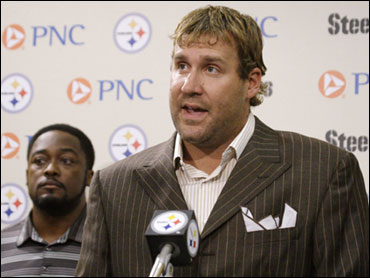 This is the second time in the past year that Roethlisberger has been accused of sexual misconduct. The incident allegedly occurred at a local nightclub, and police are investigating.

Roethlisberger already faces a lawsuit filed last July by a woman who says he raped her in 2008 at a Lake Tahoe hotel and casino - an allegation he strongly denies.

Roethlisberger, who is not in custody, has not been criminally charged in either case. The player's agent, Ryan Tollner, said in a statement he was skeptical of the motive of the alleged victim in Milledgeville because of the previous Lake Tahoe allegations.

This latest accusation came in downtown Milledgeville, about 85 miles southeast of Atlanta and about 30 miles south of the lake home the player owns. Roethlisberger, who turned 28 on Tuesday, spent the night out with friends and ended up at Capital City, a nightclub popular with students at Georgia College & State University.

Amber Hanley, a 21-year-old college student, said she and a few friends were in a VIP area in the club with Roethlisberger. She said she asked the quarterback to take a photo with her friend, whose boyfriend was a fan, but he seemed disappointed that's all she wanted. Hanley said she rolled her eyes, and Roethlisberger called her an expletive and walked away.

Deputy Police Chief Richard Malone said Roethlisberger had been with three other people who were mingling with another group that included the alleged victim. Malone said the woman and her party contacted a nearby police officer following the alleged assault.

The nature of the assault was not described, but Malone did say it was being termed a sexual assault.

Roethlisberger and the alleged victim were interviewed and the woman was taken to a hospital, where she was treated and released, Malone said. The woman was not identified by police and CBS News does not generally identify possible victims of sexual abuse.

Police said Roethlisberger and his attorney were cooperating with investigators.