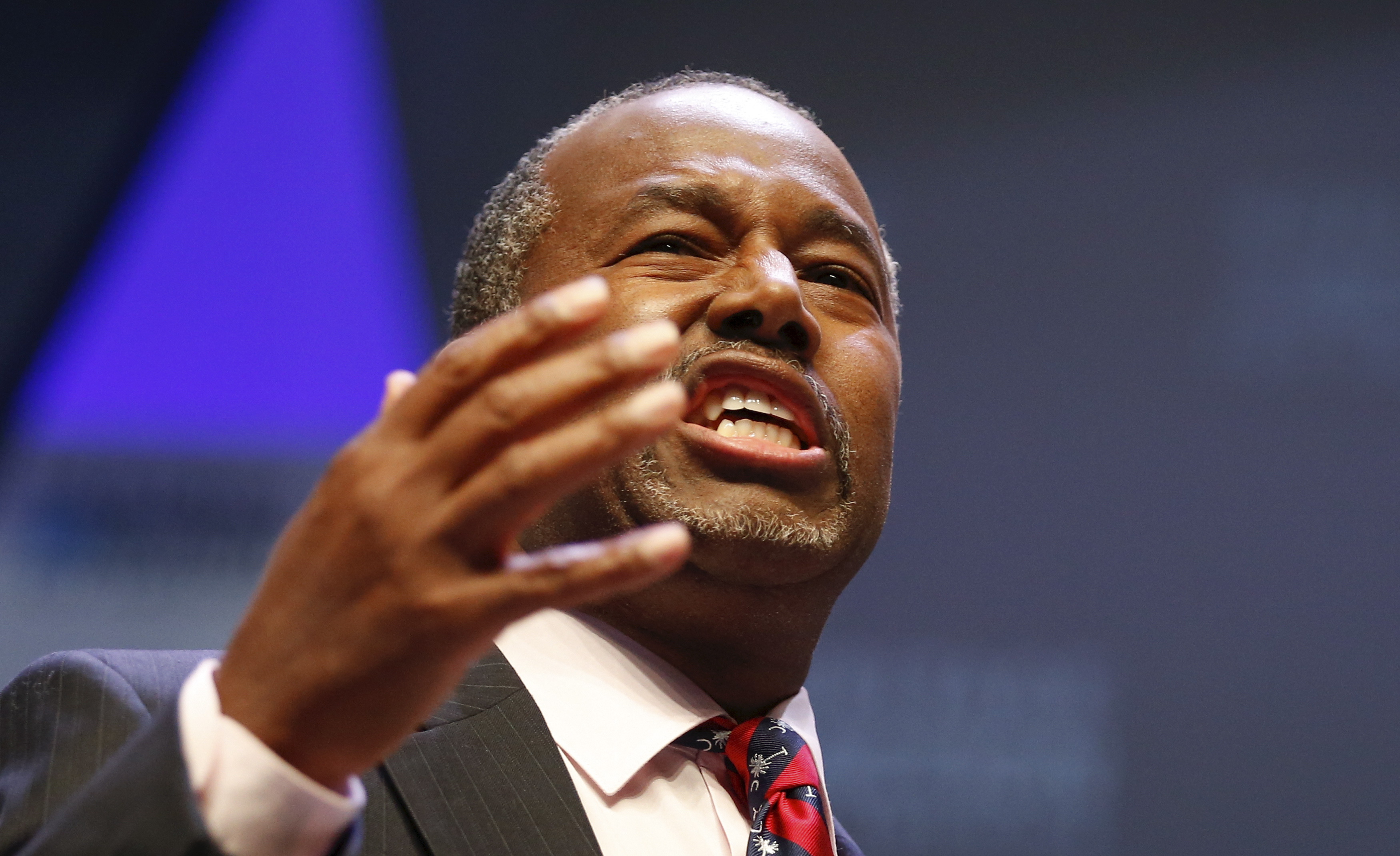 Ben Carson is unapologetic about how much he brings up Nazi Germany during his presidential campaign.

The Republican contender, in advocating against limited gun regulations, has drawn repeated connections to the Holocaust and how firearm control contributed to the rise of Hitler's Third Reich.

In his latest book, "A More Perfect Union," the GOP hopeful wrote: "[T]hrough a combination of removing guns and disseminating propaganda the Nazis were able to carry out their evil intentions with relatively little resistance."

When asked to further elaborate on the passage on CNN, Carson said Thursday that he believed "the likelihood of Hitler being able to accomplish his goals would have been greatly diminished if the people had been armed."

But the Anti-Defamation League, a prominent Jewish group dedicated to fighting anti-semitic sentiments, has pushed back against the factual accuracy of the statement: "Ben Carson has a right to his views on gun control, but the notion that Hitler's gun-control policy contributed to the Holocaust is historically inaccurate. The small number of personal firearms available to Germany's Jews in 1938 could in no way have stopped the totalitarian power of the Nazi German state."

When asked about the Jewish group's critique, Carson dismissed it as "total foolishness."

"You know, that's total foolishness. I'd be happy to discuss that in depth with anybody. But it is well known that in many places where tyranny has taken over, they first disarm the people," Carson said in an interview with ABC News.

He added that there's "a reason" dictators disarm people and that "they don't just do it arbitrarily."

On MSNBC Friday, Carson added that it's "not only the Jews, but the entire populace."

Carson has talked about the rise of the Third Reich before and admonished those who "think something like that can't happen" in America.

"Look at the world and all those examples of tyranny," he said at a campaign stop in North Carolina last week. "It can happen here."

But even Carson's own campaign admits that his Nazi Germany analogies don't help his standing in the polls.

"It's an example [Carson] has been using for years and to be honest with you he needs to find a better example because the problem is as soon as you say Hitler, nobody hears anything else you say," Carson Campaign Manager Barry Bennett told ABC News last week.

"The example is too powerful perhaps," he said. "I think that he will find other ways to say the exact same thing."

Carson has also been fielding questions about comments he's made about guns.

The retired neurosurgeon suggested earlier this week that the victims of the Umpqua Community College shooting could have done more to stop the gunman, saying that he would "not just stand there and let him shoot me."

"I would ask everybody to attack the gunman because he can only shoot one of us at a time. That way, we don't all wind up dead," he told ABC News Tuesday.

The retired neurosurgeon added Friday that "average people with common sense" could understand the validity of that comment.

"In a situation where you had a madman who was systematically assassinating people after asking them a question and they're all there waiting their turn, I would not wait my turn," Carson said on MSNBC. "I would say let's do something, you know, attack, unless you have an easy method of escape, of course, you escape. But assuming you don't have an easy method of escape, why would you just sit there and allow him to do that?"

It's advice that might seem inconsistent with Carson's own experience with a gun-related incident, which he recounted in a recent interview with Sirius XM radio.

"I have had a gun held on me when I was in a Popeye's organization," Carson said Wednesday, referring to the fried chicken fast-food chain.

"Guy comes in, put the gun in my ribs," he added. "And I just said, 'I believe that you want the guy behind the counter.'"

Rebutting criticisms of these comments, Carson said Friday that "these are not analogous situations."

"Somebody is there to rob the place versus someone who is sequentially murdering people, completely different," he told an ABC News reporter. "It may be that you can't understand that having not lived on the streets. That's a very easy distinction for me."