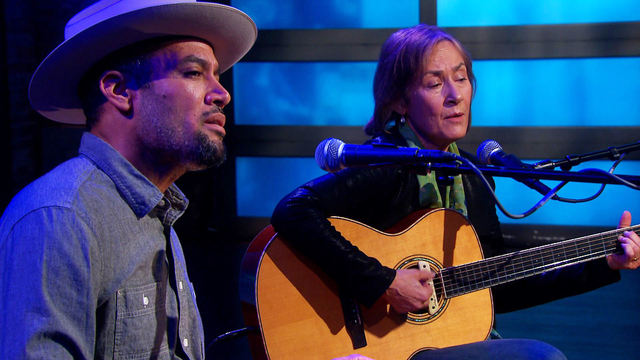 Three-time Grammy Award-winner Ben Harper travels the world performing his music, but he always returns to a special place in California, and to his mother, Ellen.

For 30 years, Ellen Harper has been running the Folk Music Center in Claremont, Calif., which her parents founded in 1958. "It's a lot of things: It's a retail store, it's a museum, it's a educational institution," she said.

"It's poetry. It's music," said Ben Harper. "It's freedom of expression as much as anything."

The center has been part of the Harper family for the last 55 years.

"My mother taught, I don't know, hundreds, countless hundreds of people to play anything," said Ellen.

And those hundreds of people also include Ellen and Ben.

"My grandma used to teach lessons and I would set up the chairs for her lessons. That was my first teenage job. And she just said, 'Get over here. You're gonna learn some music -- Sit!'" said Ben.

The center has become a second home for the Harpers. "This is as much a childhood home as any house," said Ben.

This week, he released his 16th and latest album, a collaboration with his mother Ellen -- just in time for Mother's Day. It's called "Childhood Home."

The songs explore the sounds of family life and the Folk Music Center. Ben and Ellen had nearly every instrument available to choose from. He wrote six of the tracks on the album; she wrote four.

"Once you bring a song and you're sitting and you're playing, I mean, it's music. And it's its own path. I mean, you stop thinking, 'Oh, it's my son and I maybe he thinks ...' You're two musicians and you're working together on a song," Ellen said.

And the result was a truly collaborative album.

"That's about as close as two people are gonna get to sharing one voice as I think will ever be on record. And it just felt like that," Ben said.

"Ben said something the other day that stayed with me: 'It's a lifetime of pre-production for the album," said Ellen.