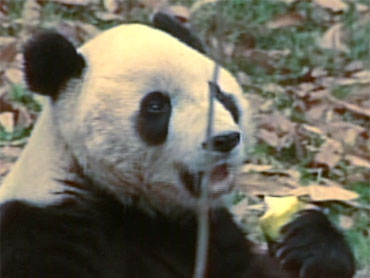 There's a special going-away party Saturday in Washington D.C. where the National Zoo is saying goodbye to its beloved giant panda, Tai-Shan.

Tai-Shan, now four and a half years old, is going into a breeding program at Bifengxia Panda Base in the mountains of south-central China.

When he was born in 2005, the zoo had to set up a 24-hour webcam because so many people wanted to see him.

"These guys are reach sexual maturity around age five or seven, but there's not a dominant male in his exhibit with him here, so he's coming in a little early and he was doing a thing called 'power walking' this year. The Chinese own the pandas that are in the United States and they want (the pandas) to go back at age two, but he's going back this year."

Moore said Tai-Shan will soon be 'power walking,' a mating technique, with a young female panda at the breeding center when he leaves next week for Sichuan, China.

Moore said Tai-Shan will be doing the giant panda population a service, particularly when one considers the species' critically endangered status. He said there are fewer than 2,000 giant pandas in the world.

"Its habitat is endangered," he said. "The Chinese have protected a lot of its habitat in refuges, but we'd like to see at least 300 in the global captive population, and still keep managing that wild population so that the panda does better."

But will Tai-Shan be able to breed in China?

"We certainly hope so," Moore said. "Tai lived with his mom and his dad longer than any other baby panda has in captivity. And hopefully he learned something, and he'll learn more in China. Bears are very good breeders when they have the opportunity."

He is scheduled to fly to China on Feb. 4. The last day of public viewing is Wednesday.

Tai Shan's parents Mei Xiang and Tian Tian are on a 10-year, $10 million loan that expires in December.