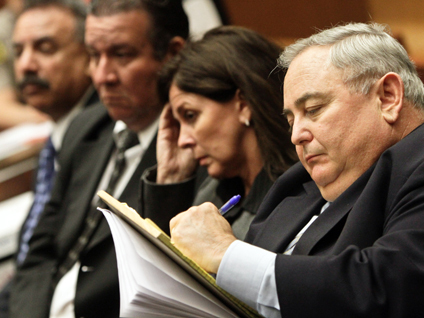 One account benefited 40 employees, guaranteeing them at least $2,000 a month if they retire as early as age 52 and had spent five years in office. That's in addition to their normal payments from the state pension system.

Another account was set aside just for Rizzo and Spaccia, allowing them to circumvent IRS regulations capping government pensions.

Lourdes Garcia, the city's director of administrative services, testified under a grant of limited immunity that Rizzo told her in 2008 that he wanted the city to spend $14 million on the secondary pension fund.

"My reaction was `That's a lot of money,"' Garcia testified. "The city doesn't have that kind of money ... He knew that money was getting tight."

An attorney for Rizzo, who faces more than 50 counts for masterminding a scam in which he paid himself and other top Bell officials massive salaries, denied that his client was setting up his own retirement plan.

"It could be that Ms. Garcia is misremembering facts," James Spertus said.

Members of Bell's new City Council say they will look into recouping some or all of the money to help reduce the city's debt.

In all, prosecutors said, Bell was looted of more than $6 million. The city of 40,000 people, where one in six people live in poverty, is in as much as $4.5 million debt.

Rizzo had an annual salary and compensation package of $1.5 million, Spaccia was paid an annual salary of more than $375,000 and six former Bell City Council members each received about $100,000 a year for part-time service.