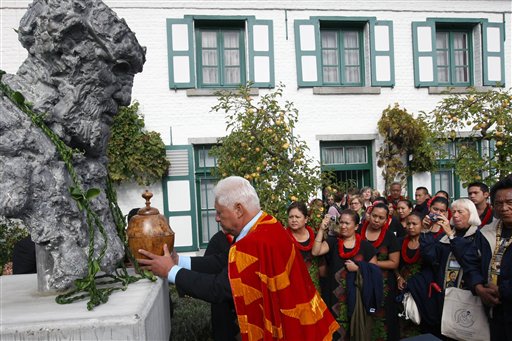 Belgian royals and government officials joined the bishop of Honolulu at a Mass on Sunday to celebrate a 19th-century local hero, a week before he will become a saint for his work with lepers on the Hawaiian island of Molokai.

The Mass began an overcast autumn day of celebrations and fireworks that lured 20,000 people to this town of 14,000, just northeast of Brussels, where Jozef De Veuster was born in 1840. Better known as Father Damien, the Roman Catholic priest from Belgium cared for leprosy victims on Molokai, an island in the Hawaiian archipelago, from 1873 to 1889, when the disease killed him.

The Catholic Church agreed to elevate him to sainthood after saying Audrey Toguchi of Aiea, Oahu, was cured of terminal cancer after she prayed to Damien and he interceded on her behalf. The church said there was no medical explanation for the woman's recovery.

Pope Benedict XVI is due to preside over Damien's canonization. The late priest was beatified _ a step toward sainthood _ in 1995 by Pope John Paul II. Eleven elderly Hawaii leprosy patients will be at the Vatican to watch the canonization.

Toguchi, a retired public school teacher, spoke briefly about her cancer at Sunday's Mass, which was celebrated in Dutch and English. It was attended by King Albert and Queen Paola of Belgium, government members and Bishop Clarence Richard Silva of Honolulu.

"It is an honor to be one of the chosen ones," said Ms. Toguchi, who was part of a Hawaiian delegation. "I feel that he (Father Damien) is offering hope to the rest who also need help. More and more people will ask him for an intercession."

The Mass was conducted by Archbishop Godfried Danneels in Ninde, the birthplace of Father Damien, now part of Tremelo.

"You should not thank us," he told Bishop Silva and the Hawaiian delegation he led to Belgium. "We gave life to Father Damien (and) we gave him to you. But you gave him back as a saint."

There is a statue of Father Damien at the U.S. capitol in Washington and a full size replica stands in front of the Hawaii State Capitol. On Sunday, a bust of Father Damien was unveiled in Ninde outside the house where he was born.

Leprosy, also known as Hansen's disease, is believed to have reached Hawaii from China around 1850. Its rapid spread and unknown cure led Hawaii's King Kamehameha V to place sufferers in isolation on Molokai's Kalaupapa peninsula, an area devoid of any amenities until Father Damien's arrival.