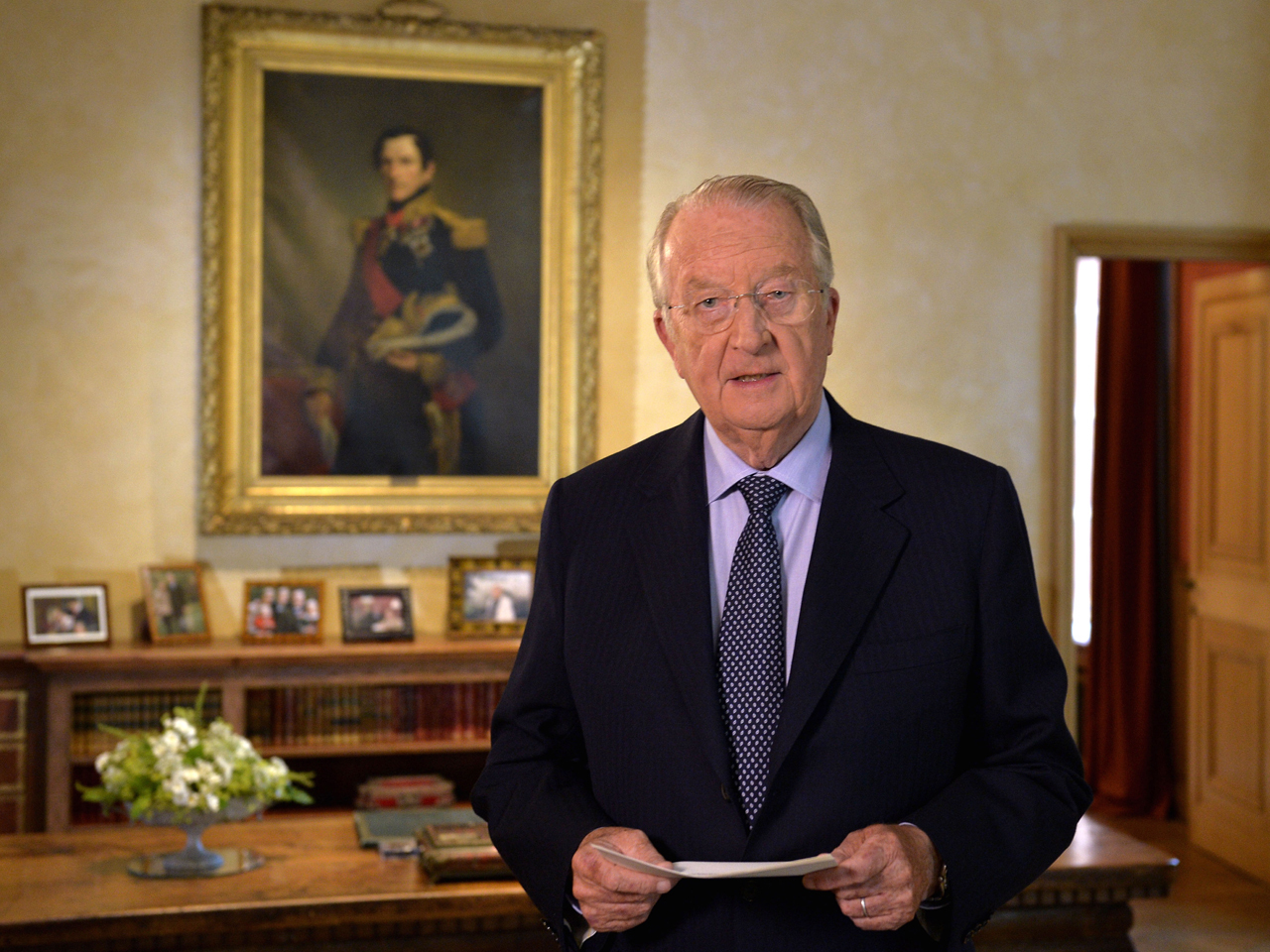 BRUSSELS Weighed down by the years, Belgium's King Albert II announced Wednesday that he will hand the throne of his fractious kingdom to his son, Crown Prince Philippe, on the country's national holiday, July 21.

The move had been rumored for weeks and will end nearly two decades of steady reign over a country increasingly torn apart by political strife between northern Dutch-speaking Flanders and French-speaking southern Wallonia.

Belying his frailty and 79 years of age, Albert stood upright and confident as he delivered the nationwide message to the cameras. Behind him, a massive portrait of Leopold I, the nation's first king in 1831, sternly looking down on him.

Albert said his age and health no longer allowed him to carry out his functions as he'd want to. "I would not fulfill my duties," he said, "if I clung at all cost to my position in these circumstances."

Belgium has had six kings since independence and Albert is the first to voluntarily abdicate the throne.

But he was the second European monarch to do so in barely two months. Beatrix of the Netherlands stepped down in April after a 33-year reign in favor of her eldest son, who was appointed King Willem-Alexander.

"After a reign of 20 years I believe the moment is here to hand over the torch to the next generation," Albert said in a nationwide address carried by all of Belgium's major broadcasters. "Prince Philippe is well prepared to succeed me."

That has long been an issue of deep contention. When Albert's brother, the devoutly Roman Catholic king Baudouin, died in 1993, it was widely expected that Philippe would take the throne instead of his father.

Yet, he was considered unprepared for the task at hand. Even now, at 53, the silver-haired Philippe has plenty of critics who see him as awkward and reclusive.

"He was always faced with the dictum, 'He's not up to it.' It still weighs on him," historian and author Marc Reynebeau told The Associated Press.

Prime Minister Elio Di Rupo said that Prince Philippe "has shown a great sense of responsibility in preparing" for the throne. Under the reign of his father, Philippe was groomed for the job as a leader of foreign trade delegations. Married to Princess Mathilde, the couple has four children.

The hesitations about Philippe may well last past July 21. If the Dutch royal handover on April 30 became a huge party across the nation, there might not be such exuberance in Belgium.

The kingdom has increasingly become a divided nation, with the 10.5 million Belgians split into distinct Dutch-speaking Flemings and French-speaking Walloons.

Belgium found itself without a government for a record 541 days before the team of Di Rupo could take the oath late in 2011. Albert had to be involved in the protracted talks because one of the few real powers a Belgian monarch has is to appoint government brokers.

Reflecting the strife, a few dozen protesters of the extreme right Flemish Interest party posted themselves in front of the royal palace Wednesday with a huge banner that said "Flanders Independent."

Belgium is enjoying something of a political lull as it prepares for potentially bruising nationwide and regional elections next spring, with the question of greater division expected to at the heart of debates. An abdication at that stage would have been inconceivable.

Reynebeau said that as Flanders and Wallonia drifted further apart, Albert's "most important gift is that he provided a sense of stability."

In his personal life, however, Albert has had his ups and downs.

After he succeeded his brother Baudouin, he became embroiled in a major royal scandal when he had to acknowledge he'd had a daughter out of wedlock, throwing his marriage with Queen Paola into a major crisis.

The issue came to the fore again this spring when the daughter, Delphine Boel, opened court proceedings to prove Albert is her father.

"He is not alone. Many royals around the world have extramarital children. But there has been a change in the sense that this becomes much more public now," Reynebeau said.

Even Albert acknowledged on Wednesday that the public's sympathy had not been unconditional.

"We thank you for your trust, sympathy and support, even if it was sometimes laced with criticism," he said.

After the formal and stiff Baudouin, Albert did bring some earthy and easygoing charm to the royalty. Di Rupo said Albert won over people "thanks to enthusiasm, sense of humor and attitude."

Local resident Isabelle De Crayencour said she'd hoped he would stay on as long as possible.

"He kept our country standing for 20 years," she said. "So isn't it a bit 'Goodbye Belgium' now?"

It was no secret that the years were taking their toll on Albert. The king with a love of sleek motorcycles had become increasingly frail, sometimes relying on a walking stick.

Also, unease has grown about the lavish finances of the royal household. "Such things used to be accepted, but they no longer are. It eats away at his image," Reynebeau said.

So many said the time to leave was well-picked.

"He took a good decision," said student Jeremy Desfougeres. "He arrives at retirement like everyone. We young people are also going to retire one day, so I think it is good for him that he does that."